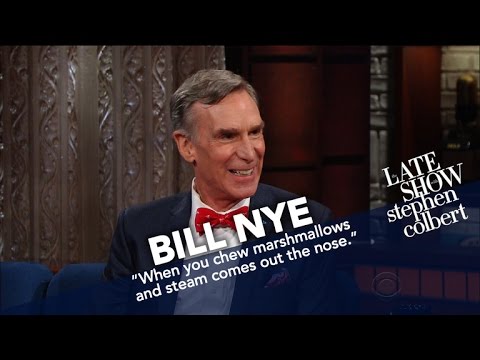 Yesterday, I wrote "The next entry will be about Bill Nye and The Resistance" and that I would post it today.  Time to follow through.

The 43rd most read entry of the seventh year of this blog and the 38th most read actually posted during the blogging year is Bill Nye cited the Constitution to justify the March for Science on Colbert's show from May 9, 2017 with 2120 raw page views.  It was also the most read entry during June 2017 with 1874 default page views.

When I wrote "I will be serving political leftovers" this week, this is one of the items I was planning on warming up.

By the way, here is Bill Nye at Huge Science March Crowd “Science Must Shape Policy!” from Climate State where he cites that section of the Constitution.

On Earth Day, April 22, Bill Nye, CEO of the Planetary Society, also known as “The Science Guy,” spoke in front of large crowd in Washington DC.

He didn't start saying that on Colbert.

The next retrospective will be about the Oscars.  I will post that next week.  Stay tuned.

Previous retrospective about The Resistance. Previous entries about the top posts of the seventh year of this blog.
Posted by Pinku-Sensei at 12:00 AM