Life expectancy down for a second consecutive year in the U.S. 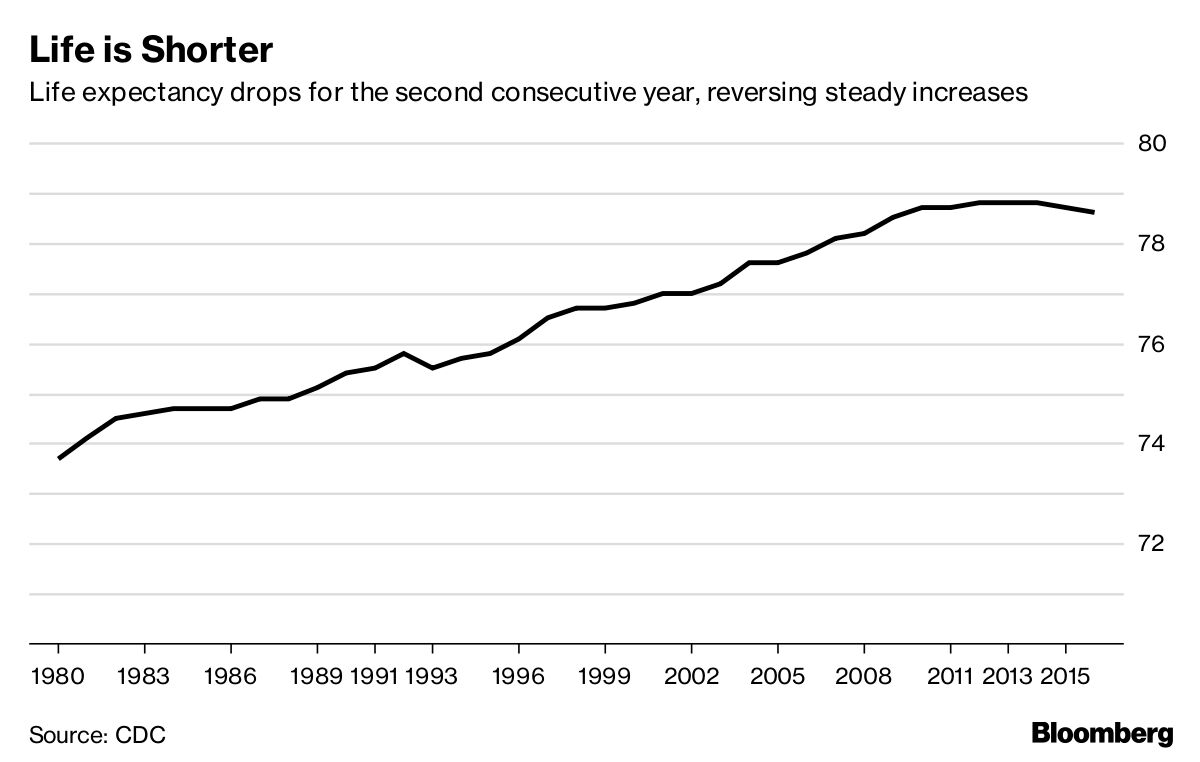 I observed the following in a footnote to Anthony Bourdain's and Kate Spade's deaths call attention to rising suicide rates in the U.S..

All this reminds me that I haven't updated my readers on U.S. life expectancy falls prompting Russian analogies from 2016.  U.S. life expectancy fell a second consecutive year in 2016 and likely fell again in 2017.  The last time that happened in the U.S., it was because of the Spanish Flu during 1916-1918.  I plan on writing about both the drop in life expectancy as well as the falling birth rate next week.  Stay tuned.

I also mentioned that "Saturday is still this week" in Business Insider on dead malls in the Retail Apocalypse with assistance from Dan Bell and Radiohead, so it's time to make a down payment on that promise with Opioids driving down U.S. life expectancy from CBS News.*

Life expectancy in the U.S. has declined for the second year in a row, and opioid drug-related deaths are partially responsible, according to the CDC. Washington Post health reporter Lenny Bernstein joins CBSN to discuss.

Looks like I will have to blog some more about the opoid crisis outside of nominees and winners for awards shows.  At least my entertainment entries serve some serious purpose!

As I wrote above, life expectancy is likely to decline for a third year in a row.  From the Tech Times article I linked to above.

Last year, the death rate rose making 2017 the third straight year of decline in the American life expectancy rate, preliminary data suggests. On Wednesday, May 23rd, the Centers for Disease and Control posted numbers online that claim the death rates in America rose due to Alzheimer's Disease, diabetes, the flu, pneumonia, and three other causes.

That's the bad news.  The article also had some good news.

Despite this current epidemic, the good news is that the death rate for cancer continues to drop. Cancer, which is considered the nation's second "killer," fell 2 percent in 2016. The heart disease rate also fell. However, the percentage it dropped to was 0.3 percent.

Experts believe that the nation's growing obesity rate could be one of the major factors in heart disease rate decline. Death rates attributed to HIV and blood infections also declined.

I'll be sure to report on the final numbers for 2017, which should come out at the end of the year.

*I'll pay the rest of my promise tomorrow, when I plan on writing about the lower birth rate for Father's Day.  Stay tuned.
Posted by Pinku-Sensei at 1:46 PM