Energy and climate in the State of the Union 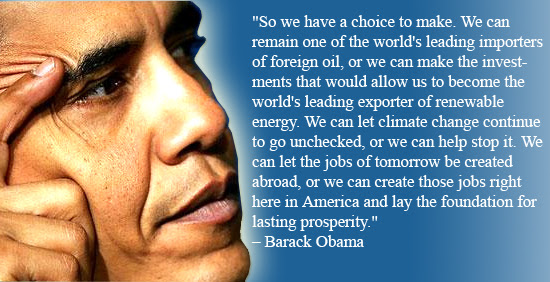 In Unemployment insurance extension and the State of the Union, I opened by praising the president.


I watched tonight's State of the Union address and marveled that the entire speech was organized around the conflict between austerity and sustainability, with President Obama consistently coming down on the side of sustainability.  It fits what I've been blogging about here for the past three years, as I've written about every major topic Obama mentioned at least once, some of them, such as energy, education, healthcare, and technological innovation many times.  I felt validated.

His statement on energy is a prime example.  PBS NewsHour has the entire passage in Obama calls for investment in 'fuels of the future'.

In his 2014 State of the Union address Tuesday, President Barack Obama pledged his commitment to U.S. energy independence by investing in natural gas and solar energy. He also talked about shifting to a "cleaner energy economy" that will benefit the environment. "Climate change is a fact," he said. "And when our children's children look us in the eye and ask if we did all we could to leave them a safer, more stable world, with new sources of energy, I want us to be able to say yes, we did."

PBS has more at its website in Addressing climate change, Obama pledges commitment to clean energy.

Over at Daily Kos, Jed Lewison counted the words and noted how they reflected Obama's priorities.


Three mentions of the word "climate" in the speech. And three mentioning "al Qaeda." Probably the first time there's ever been parity, though climate change is still obviously a  much bigger threat.

I agree with Jed.  Just the same, this was music to my ears.  I'm also not surprised.  As I've mentioned multiple times, but most appropriately last year at this time in Obama loved science in the State of the Union, "President Obama really likes the idea of sustainable development packaged as making America competitive, and his State of the Union address reinforced that meme."  He did it again this year and I'm glad he did.
Posted by Pinku-Sensei at 9:31 AM