Suburban poverty north and south of the border

Normally, I'd post another conversation with The Archdruid.  I even have the parts for it lying around.  However, I'm both tired out from posting four entries a day for the past two days to assemble it and thinking I should do something else.  Fortunately, I found two videos this past week about problems with suburbia and a third about poverty in general.  The first comes from PBS NewsHour and declares Poverty rates surge in American suburbs.

When President Johnson declared a "War on Poverty" fifty years ago, images of American poverty focused on the inner-city and rural poor. What is the state of American poverty today? Megan Thompson reports on the less visible but growing number of poor in America's suburbs.

Here's the takeaway from this story.  Since 2000, poverty is up 60+% in the suburbs, so there are now more poor people in the suburbs than in either the central cities or rural areas.  Kunstler's prediction that the suburbs would become the slums of the future are coming true.  He might be able to take some grim satisfaction from this happening in Long Island, in a suburb of his old hometown (NYC) and in his current home state.

PBS NewsHour isn't done with the subject of poverty in the U.S., as they report that Gap between wages and consumer prices imperils security.

Wages in the U.S. have been largely stagnant over the past 45 years, but during the same time span consumer prices have risen dramatically. Hari Sreenivasan discusses this trend and its effect on poverty with Bloomberg BusinessWeek reporter, Roben Farzad.

When Kunstler decries "the gritty plight of ordinary citizens getting monkey-hammered in an economy that can provide neither decent incomes nor dignified, meaningful social roles for classes of people who could be earnest, honest, and enterprising given the chance," here it is in charts and numbers, instead of florid prose.

Speaking of charts and graphs, here's one from Brad Plumer of the Washington Post showing the growth of poverty in the suburbs. 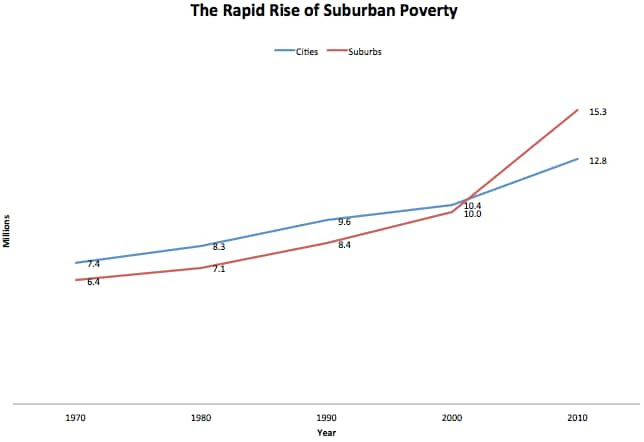 There are even problems with suburbia south of the border in Mexico, where KPBS reports Abandoned Homes Plague Tijuana's Outlying Suburbs.

In the past few decades, millions of Mexicans became homeowners thanks to higher salaries and government aid. The increased demand fueled a boom of low-cost suburbs in cities like Tijuana. But now, many of those suburbs are falling into disarray, and residents have fled. There are an estimated 50 thousand abandoned homes in Tijuana and some 600 thousand across Mexico. In this second in our series exploring Tijuana's history and neighborhoods, Jill Replogle from our Fronteras Desk explores why.

This looks all too familiar.  Adopt an American solution, get American problems.  On the other hand, it looks like the Mexican government is learning by focusing on sustainable housing close to work and services.  Maybe we can learn from them.
Posted by Pinku-Sensei at 12:55 AM