Earth from space: climate and archeology

I concluded New Year's Day asteroid strike and other space and astronomy news by promising "news about Earth from space."  Here are the stories from Overnight News Digest: Science Saturday (California Drought Emergency) on Daily Kos about studying our planet from orbit.  Under the "if it moves, it leads" policy, JPL's video Polar Vortex Behind U.S. Big Chill Explained comes first.

The chilling weather phenomenon that hit much of the U.S. in January is explained by scientist Eric Fetzer using data from NASA's AIRS instrument.

That's not all.  The University of Rhode Island has another story about studying weather and climate from orbit in Emily Serman: Investigating Global Climate Change at NASA.

Climate change threatens everything from the safety of coastal communities to the purity of the air we breathe. To better understand this phenomenon, the National Aeronautics and Space Administration operates an extensive environmental program. Playing a key role in the program are paid interns like University of Rhode Island student Emily Serman (’14).

The civil and environmental engineering student spent four summers interning at NASA’s Wallops Flight Facility in Virginia, a hub for the agency’s weather-related research. The first year, she analyzed phytoplankton. During the next three summers, she served on a team studying the behavior of ozone, which protects the Earth from the sun’s rays but can also cause disruptive temperature changes in the atmosphere.

At NASA, Serman calibrated data collection instruments, reviewed reams of data and organized atmospheric observations spanning many years so scientists could identify long-term trends. In later summers, she ran calculations to determine the contours of ozone in the atmosphere’s multiple layers. Finally, she brought it all together in presentations to NASA administrators.

“It was more than just doing calculations on paper,” Serman says. “I saw how it fit into the real world. Plus, when you are at NASA you feel like you’re in a special group of people.”

Follow over the jump for how remote sensing, whether from orbit or just in the air, is aiding archeology. 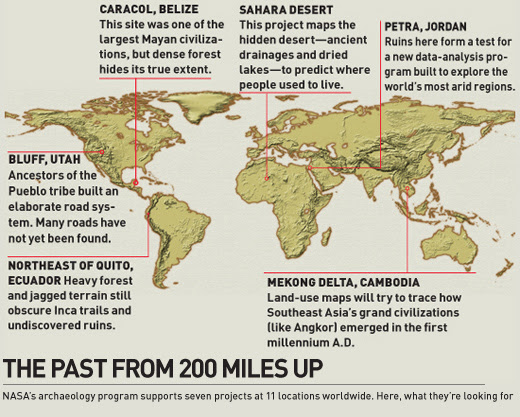 Since the onset of Syria's civil war, archaeologists have worried about the destruction of the country's rich cultural heritage.

Take a walk in the New England woods, and you may stumble upon the overgrown remains of a building's foundation or the stacked stones of a wall. Now, researchers have begun uncovering these relics from the air.

Examinations of airborne scans of three New England towns revealed networks of old stone walls, building foundations, old roads, dams and other features, many of which long were forgotten. These features speak to a history that Katharine Johnson, an archaeologist and study researcher, wants to see elucidated.