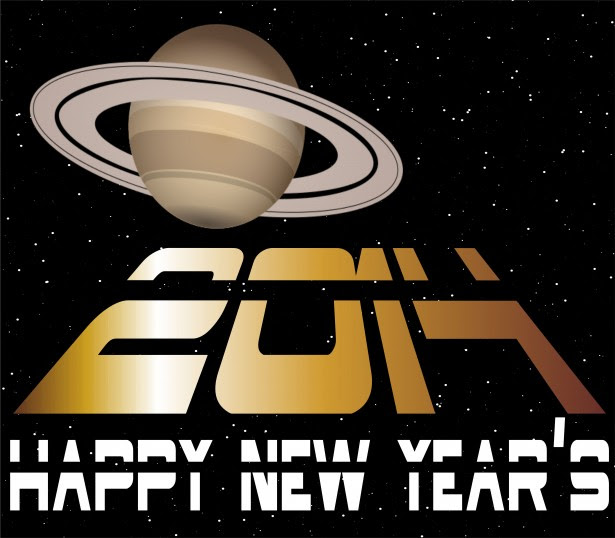 Continuing with the Happy New Year from space theme, here's NASA Sends Out of This World New Year's Greeting in Times Square.

A New Year's video greeting from Expedition 36 flight engineer Karen Nyberg, who returned from the International Space Station in November, and from three of the astronauts currently on board the space station: NASA's Rick Mastracchio and Mike Hopkins, and Koichi Wakata of the Japan Aerospace Exploration Agency.

Next, CNN gives a sampling of ringing in the New Year with Watch New Year celebrations worldwide.

People around the world from New Zealand to Dubai ring in the New Year with fireworks and traditions.

Follow over the jump for more videos of New Year celebrations that have already happened.

I begin the tour through the Eastern Hemisphere with The Telegraph presenting New Zealand celebrates 2014 New Year.

Auckland was the first major capital of the world to see in the New Year with a fireworks display in the city's harbour.

The Telegraph leads the tour to the next destination with Sydney New Year firework display in full, complete with music.

Sydney Harbour is lit up by a huge firework display that organisers claim is the largest the city has ever seen.

More than 1.6 million revellers are thought to have lined the harbour area to enjoy the spectacle.

The fireworks were launched from the Sydney Opera House as well as the city's Harbour Bridge.

The show is rocking to AC/DC and other Australian musicians.  I should have figured.

Reuters continues to the next stop with Taiwan welcomes the New Year with a bang.


PBS NewsHour picks up the baton in this relay race around the world with Watch Dubai's record-breaking New Year's fireworks.

Dubai set the world record for the largest fireworks display in history with its New Year's celebration that saw 500,000 fireworks erupt over the city.

200 technicians worked for 5,000 hours to ensure that the show went off without a hitch in order to beat Kuwait's 2012 world record launch of 77,282 fireworks.

Dubai may have had the biggest and most impressive display, but I think Sydney had the better New Year's Eve party.

Reuters picks up the baton again, taking the tour to Berlin with Fireworks light up the night sky at the Brandenburg Gate, welcoming 2014.


The Beeb concludes this trip through the Old World with London Fireworks 2014 - New Year's Eve Fireworks - BBC One.


The Brits are keeping up with the Aussies in the fireworks and music departments.  Looks like a fun time was had by all.

Finally, here are fireworks of another sort from Tipsy Bartender in Los Angeles: A Fire Breathing New Year.

***DO NOT ATTEMPT ANYTHING YOU SEE IN THIS VIDEO***
As the New Year rolls in across the world we want to wish all of you a happy and prosperous 2014. Thank you for all the support you have given to this show. We love and appreciate each and every one of you. We have a lot of new stuff coming. There will be episodes featuring very special guest. The Tipsy Bartender book, "I'm having a girl over" will be on sale in the next few weeks. This year is going to be HOT! We got Sophia to blow fire to symbolize the heat that is coming your way! Happy New Year! :-)

It wouldn't be an "I can't be all DOOM all the time" holiday post without Tipsy Bartender and it wouldn't be a New Years Eve entry without Auld Lang Syne, so this post is now complete.