I opened and closed A new year in space and other space and astronomy news by looking ahead to writing about population.

After two snow days, today is now the first day of classes for the new semester.  Normally, I'd post something related to my teaching; in fact, I have two articles about population that would serve nicely.
...
Stay tuned for more, including the population stories I promised at the beginning of this entry.

In tonight's installment, I have two articles from the Washington Post conveying news that doesn't surprised me.  First, Population gains at near-historic lows
By Carol Morello
Published: December 30

The population of the United States is growing more slowly than it has since the Great Depression in what demographers say is a reflection of the recession’s lingering effects on people’s behavior.

New population estimates released Monday by the Census Bureau show the nation added about 2.2 million residents in 2013. On New Year’s Day, the census projected, the U.S. population will surpass 317 million people, a one-year increase of 0.7 percent.

The last time the nation grew at a slower pace was in the heart of the Great Depression, from 1932 to 1937, according to an analysis by demographer William Frey of the Brookings Institution.

I could see this coming more than two years ago, when I posted Next Media Animation thinks low birth rates in the U.S. and China aren't all good.  Take it away, LiAnn!

US birth rates have been falling ever since the recession started, and studies show that this year they've fallen even more! In 2007, there were over 4.3 million babies born, the most ever. It's supposed to go up every year. But now it's down to 4 million. This year, young women from their teens to early 20s have the lowest birth rate ever!

She's right; the economy is the best form of birth control. 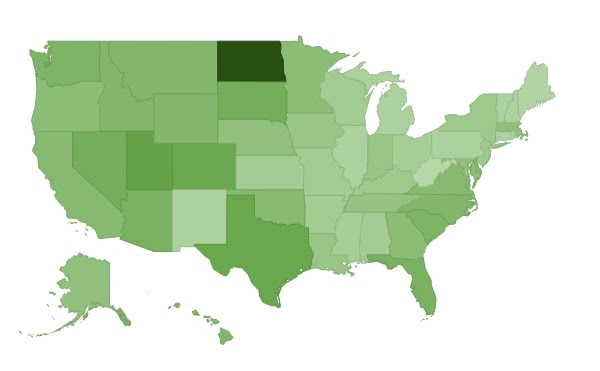 North Dakota...added 22,000 residents over the past year. That was a 3.1 percent population increase, the highest of any state in the country, fueled by an energy boom in the Bakken oil fields that has pushed the state’s unemployment rate down to 2.6 percent.

The next the fastest percentage growth occured in Utah, which increased its population just 1.6%, just over half of North Dakota's.  The difference there is that people are moving to North Dakota; they're being born in Utah.  Texas came in third with 1.5%, where both births and immigration are likely equally responsible.

What about the states with the greatest absolute growth?

Texas added more residents, 387,000, than any other state, the estimates show. California, which added 332,000 residents over the past year, is the first state to top 38 million in population.
...
And despite news reports last week that suggested New York could lose its position as the nation’s third-largest state to Florida, the Census Bureau said the Empire State kept its narrow lead. New York had 19,651,127 residents as of this July, the estimates show, fewer than 100,000 ahead of Florida’s 19,552,860 residents. Florida grew by 1.2 percent, adding 232,000 residents over the last year, while New York added just 75,000 people — an increase of 0.4 percent. Those trends suggest Florida will surpass New York in the 2014 estimates.

After Florida, it's a long way down to North Carolina in fourth with 99,696 new residents.

As for Michigan, the Great Lakes State actually gained population last year, with 13,103 new residents for a growth rate of 0.1%.  It's not much, but it beats being the only state to lose population in the 2010 census.

I have another article about population growth slowing down in the rest of the world, but I'll save that for another entry.
Posted by Pinku-Sensei at 12:57 AM