Science fiction and fantasy at the Razzies 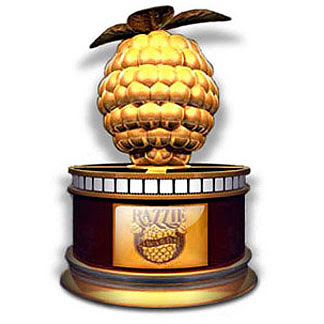 I apologize for slacking, as I haven't followed through on the promise I made in Politics, science fiction, and fantasy at the Golden Globes to "get back to all of you tomorrow after the winners are announced."  I'm still not following through with that.  I'm going to use the excuse that I'll do so in the context of the announcement of the Oscar nominees in the morning, when nearly all the Golden Globe winners and most of the nominees for film should make the cut.  Instead, I'm going to celebrate the worst of big budget films, as the nominees for the Golden Raspberry Awards AKA the Razzies were announced yesterday.  I'll let the Razzies themselves announce the (un)lucky contenders in 34TH RAZZIE Nominations.

34th Razzie Nominations - Who's been summoned to "Own Their Bad!"

That's a good list except for one film.  I looked at both the Razzies website and the Wikipedia page for this year's nominees and didn't see "Runner Runner" listed as a nominee.  Derp on Hollyscoop for that.

That written, the list of nominees, which can be seen both at the Razzies site and relevant Wikipedia page, supports the main reason why the Smithee Awards don't recognize comedies; there is nothing unfunnier than a bad comedy, and the field is full of bad comedies.

As for the subject line of this entry, a hard science-fiction movie, "After Earth," a steampunk fantasy, "The Lone Ranger," and a cartoon fantasy, "Smurfs 2, fill out the science fiction and fantasy nominees.  As Hollyscoop mentioned, "After Earth," which I wrote about in "After Earth" in this installment of Crazy Eddie at the movies garnered six nominations, including Worst Movie, Worst Lead Actor, Worst Supporting Actor, Worst Screen Combo, Worst Director, and Worst Screenplay in what the Razzies call "Planet Nepotism."  As Hollyscoop also reported, "The Lone Ranger" earned five nods, Worst Movie, Worst Lead Actor, Worst Director, Worst Screenplay, and Worst Sequel, Prequel, Remake, or Rip-off.  The sole nomination for "Smurfs 2" is Worst Sequel, Prequel, Remake, or Rip-off.

To be honest, I haven't seen any of these movies.  I'm sure I'll eventually convince my wife to watch "After Earth" and "The Lone Ranger" when we don't have to pay extra for them, but the latter has such a bad odor about it that my wife, a big Johnny Depp fan, couldn't get excited enough to watch him as Tonto to bother paying for on-demand showing.  That's bad.  Once we do that, I'll get back to my readers about them.
Posted by Pinku-Sensei at 1:08 AM