Science from the fans in the stands 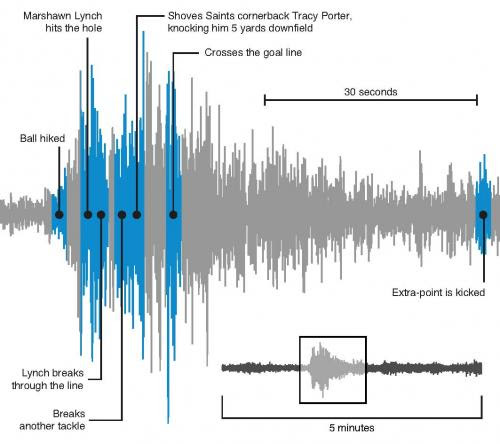 In Research from BCS Championship universities, I described the science generated by Florida State and Auburn, the schools participating in the event.  Now, it's time to document the science generated by the fans of pro football teams participating in the NFL playoffs.  Here are two stories from last night's Overnight News Digest: Science Saturday (Polar Vortex) on Daily Kos that share this connection.

First, some real science from the University of Washington via PhysOrg: Scientists to observe seismic energy from Seahawks' '12th man' quakes by Bill Steele on Jan 10, 2014.


University of Washington seismologists this week installed two strong-motion seismometers at CenturyLink Field in Seattle to augment an existing station in recording shaking from "earthquakes" expected on Saturday during the NFC divisional game between the Seattle Seahawks and New Orleans Saints.

The Pacific Northwest Seismic Network is preparing a special website at www.pnsn.org/seahawks for the game to display seismograms from all three seismic stations in near-real time, and seismologists will also be available to explain interesting signals. Seismologists also will highlight interesting signals in tweets (@PNSN1) and on Facebook (thePNSN).

Seahawks fans, collectively known as "the 12th man," have a well-known reputation for generating noise and shaking in the stadium during games. Perhaps the best-known example occurred on Jan. 8, 2011, during a 67-yard touchdown run by the Seahawks Marshawn Lynch that helped Seattle defeat New Orleans in an NFC Wild Card game.

The seismogram for the sequence of events leading to the score and the point after illustrates this entry.


Scientists hope to record similar shaking during Saturday's game to better understand how the stadium responds to the activity, and to measure the energy transmitted to the ground within the stadium and within the surrounding neighborhood.

History repeated itself yesterday, as Seahawks beat Saints 23-15, advance to NFC championship game.  It looks like they'll be facing the 49ers, who are beating the Carolina Panthers halfway through the fourth quarters as I type this.  I'll be rooting for the 49ers.

Next, a health story with a human interest angle from UCSD: Football Fans Team Up for Organ Match by Jackie Carr on January 08, 2014.
Random stadium seat assignment leads to lifesaving transplant surgery


In October 2013, Louis Munoz donated one of his kidneys to William Lynch. The organ match would not have occurred without a bit of serendipity and a big love of football. Munoz and Lynch had been childhood friends, but hadn’t seen each other in years – then they found themselves randomly seated next to each other at a Chargers game.

“Louis and I knew each other as kids and then lost touch. Years later, by surprise, we ended up sitting right next to each other at Chargers games,” said William, a middle school teacher. “When I started missing games, Louis asked me why and I explained that due to kidney complications, I’d been unwell. His wife half-jokingly suggested that he give me a kidney.”

Louis immediately volunteered to be tested as a possible donor. William initially declined his friend’s offer, believing another donor would come through. But when that didn’t happen, Louis followed through and proved to be a match.

The Chargers are playing in the next elimination game today.  They're underdogs against the Denver Broncos.  That's not stopping me from rooting for them, so there will be an all-California Super Bowl.  If that happens, I'll be rooting for the Chargers, but I'd be happy with either winning the NFL championship.
Posted by Pinku-Sensei at 3:53 PM