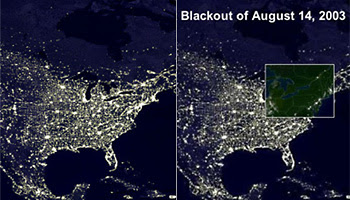 Last month, I observed that Deepwater Horizon spill still being studied.  That was four years after the event.  To give an idea of how long people may be learning lessons from a catastrophe, I present Applying Lessons Learned from One of the Biggest Blackouts in History from Georgia Tech, which demonstrates that eleven years later is not too late to discover something useful.

On a warm afternoon in August 2003, in rural Ohio, a high-voltage power line brushed against some untrimmed tree limbs. The action tripped a relay that immediately shut off the power it was carrying. As system operators worked to understand what was happening, three more lines sagged into trees and were shut down. Joining power lines were forced to shoulder the extra burden until they, too, failed.

What ensued that day was a cascade of failures throughout the northeastern United States and southeastern Canada. In all, 50 million customers lost power for up to two days. For many, this blackout served as a wake-up call to the fragility of the electric energy grid.

More than 10 years later, our electric power system continues to be challenged. In the United States, 149 power outages affecting at least 50,000 customers occurred between 2000 and 2004, a number which grew to 349 between 2005 and 2009. In 2012, the prolonged power outages in New York and New Jersey caused by Hurricane Sandy once again demonstrated the system’s vulnerability.

This is an important enough event that I ask about it in the class worksheet for The End of Suburbia and repeat it again in WNWO talks blackout.

8. Summarize the size, causes, and effects of the blackout of August 2003; include how peak usage contributed to the crisis.

The Georgia Tech article gives answers to all of that question except the part about peak usage.  Here's that part of the answer from Still hot enough for you?

The late Russell Simmons mentioned that the power grid was most vulnerable between 4:00 PM and 5:00 PM on hot days because all three sets of customers, residential, commercial, and industrial, were online at the same time.

That's an answer, but it's not a solution.  According to Georgia Tech, this is.

A phenomenon called a “voltage collapse” can cause a blackout when electricity demands reach a critical level, even if there is sufficient power generation to meet the demand. The Northeast Blackout of 2003 led utilities and the government to team up to install a phasor network throughout the United States.

By placing phasor measurement units at critical points in the network, operators can assess system stress. Miroslav Begovic, a professor in the School of Electrical and Computer Engineering, helped to develop a methodology that uses the data collected from phasor measurement units. System operators can quickly assess the state of the power system and determine in real time whether it is in danger of a blackout.

In other words, this solution is part of the "smart grid," which promises "improved energy efficiency, optimization of power supply and demand, and greater transparency into power consumption."  I hope my favorite Rambling Wrecks are right about that one, but even they acknowledge this is a necessary but not sufficient part of the solution.  I just hope the rest of their ideas--integrating renewable energy sources, analyzing energy policies, and securing utilities from cyber attacks--are sufficient so long as enough electricity is generated.
Posted by Pinku-Sensei at 7:37 PM