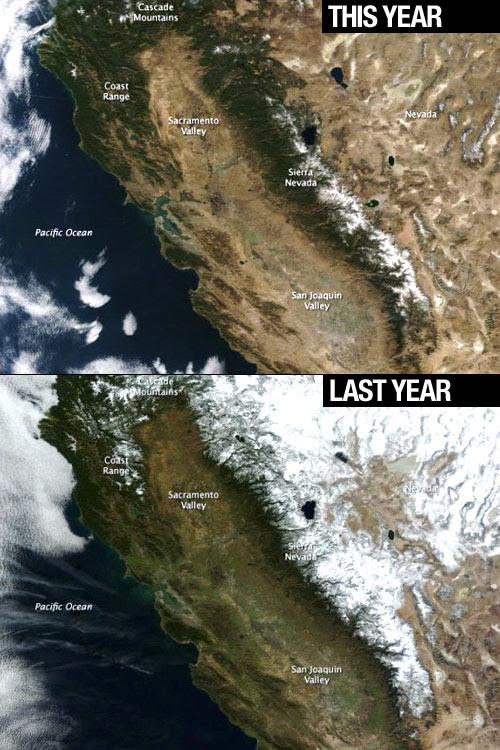 Since Drought news for Groundhog Day from KPBS, NASA has weighed in on the issue with a video from Science at NASA: ScienceCasts: California Drought.

California is experiencing a historic drought--by some measures the deepest in more than 100 years. NASA researchers are investigating a number of explanations for what the underlying cause may be.

There has also been a welcome development in the story as David Wagner of KPBS reported last Friday ‘Pineapple Express’ Is Bringing Rain To Northern California.

This weekend, Scripps Institution of Oceanography sent Marty Ralph on flights straight into an "atmospheric river" over Northern California. Atmospheric rivers are narrow but powerful plumes of moisture. The ones that hit the West Coast tend to originate in Hawaii, hence their fruity nickname. These storms are responsible for delivering a huge amount of California's annual precipitation.

Scripps climate researcher Dan Cayan contributed to the research while staying grounded in La Jolla. He says if we think of normal storms like lawn sprinklers, then atmospheric rivers are more like fire hoses. They can cause floods, but can also replenish drought-stricken regions.

I'd post Professor Farnsworth, but even the foot of water in northern California over the weekend is not enough to end the drought.

Follow over the jump for the rest of the news, including a story from Georgia.  California isn't the only state with drought issues.


Amid California's severe drought, water officials announced Friday the State Water Project may not make any deliveries this year -- an unprecedented decision that impacts residents and farmers across two-thirds of the state, but will not have an immediate impact on San Diego County, according to San Diego County Water Authority.

Twenty percent of the county’s water supply generally comes from the state’s system of canals, pipes and dams that delivers melted snowpack and rainfall runoff from Northern California to water agencies across the state.

San Diego County gets the majority of its supply, 60 percent, from the Colorado River.


The Sacramento-San Joaquin Valley Emergency Water Delivery Act would allow more water to be pumped out of the Delta and sent to farms. Critics say it favors farms over fish and environmental concerns.

The bill was co-sponsored by every California House Republican, including Tom McClintock whose fourth district includes El Dorado, Tuolumne and Calaveras Counties.

But Democrats are staunchly opposed; including John Garamendi whose third district includes parts of Sacramento, Yolo and Solano counties.


San Diegans have been good at conserving water in recent years but will have to step up their game because of the statewide drought, interim San Diego Mayor Todd Gloria said Wednesday.

"I need to thank all of you for your successful efforts over the past several years to save water and I need to ask you to continue your conservation and even challenge you to ramp it up, given the significant water supply challenges facing our state,'' Gloria said. "We live in a beautiful city, but it's one with a dry climate, and we need to accept conservation as a permanent way of life.''

This is the third dry winter in a row in California and snowfall has been light in the Sierra Nevada mountains, which provides the state with most of its water. Gov. Jerry Brown has asked residents to cut back water use by 20 percent, and state officials have halted deliveries from the State Water Project.

Now, the story from the University of Georgia: Drought affects the carbon cycle in Georgia blackwater rivers.


Athens, Ga. - Droughts might be affecting how Georgia's blackwater rivers process carbon, according to a new study led by an ecologist while he was at the University of Georgia. The results, which were published in the Journal of Geophysical Research: Biogeosciences, report less carbon being transported downstream, higher concentrations of carbon in the water and increasing rates of carbon dioxide released into the atmosphere in years following droughts.

Blackwater rivers wind through the wetlands and bottomland forests of Georgia's coastal plain. These waters are home to some of the state's most iconic features with towering cypress trees rising gracefully from their slow moving and tannin-stained waters.

Blackwater rivers also contain large amounts of carbon, making them important for their role in the global carbon cycle-the continuous movement of carbon in various forms through soil, water, air, plants and animals.

I ended News for the last day of campaigning for San Diego Mayor by writing that I might not return to San Diego news sources until May.  The exception would likely be for coverage of the drought.
Posted by Pinku-Sensei at 7:36 PM