Opportunity and Curiosity in this week's space and astronomy news 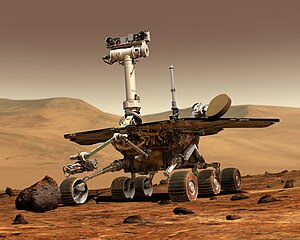 Two Mars Exploration Rovers, Spirit and Opportunity, landed on the Red Planet in January, 2004, on a 90-day mission. Spirit's mission lasted 2,269 days (over 6 years) and ended in 2010. Ten years after landing, the Opportunity rover continues to explore. The rover's science team explains how Opportunity traversed the Red Planet, examined the diverse environment and sent back data that transformed our understanding of Mars.

Follow over the jump for This Week @NASA and astronomy news from the realms of theory and deep space.

From the borderland between physics and astronomy, Ian O'Neill of Discovery News via Space.com brings the startling news of Stephen Hawking: There Are No Black Holes


On reading a new paper by Stephen Hawking that appeared online this week, you would have been forgiven in thinking the world-renowned British physicist was spoofing us. Hawking's unpublished work — titled "Information Preservation and Weather Forecasting for Black Holes" and uploaded to the arXiv preprint service — declares that "there are no black holes."

Keep in mind that Hawking's bedrock theory of evaporating black holes revolutionized our understanding that the gravitational behemoths are not immortal; through a quantum quirk they leak particles (and therefore mass) via "Hawking radiation" over time. What's more, astronomers are finding new and exciting ways to detect black holes — they are even working on an interferometer network that may, soon, be able to directly image a black hole's event horizon!

Has Hawking changed his mind? Are black holes merely a figment of our collective imaginations? Are all those crank theories about "alternative" theories of the Cosmos true?!


An exploding star has suddenly appeared in the night sky, dazzling astronomers who haven't seen a new supernova so close to our solar system in more than 20 years.

In just the last few days, a the supernova emerged as a bright light in Messier 82 - also known as the Cigar Galaxy -  about 12 million light-years away in the constellation Ursa Major, or the Great Bear. The supernova, which one astronomer described as a potential "Holy Grail" for scientists, was first discovered by students at the University College London.

Positioned between the Big Dipper and the Little Dipper, the new supernova should be easy for skywatchers in the Northern Hemisphere to spot; it may even brighten enough to be visible through a small pair of binoculars, said astronomer Brad Tucker, of the Australian National University and the University of California, Berkeley. Beyond creating a skywatching spectacle, the cosmic event may also afford astronomers a rare opportunity to study an object that might help them understand dark energy.

That's it for last week's news with a cosmic perspective.  Time to start gathering this week's.
Posted by Pinku-Sensei at 2:45 PM