The Archdruid and I have a conversation about science fiction 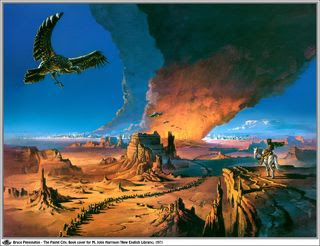 Cover art for The Pastel City.

At the end of I inspired The Archdruid to write about Steampunk, I observed that Greer's next essay is about Fascism.  That's up and I've responded to it, but while I'm waiting for my comments to be approved and Greer to respond to them, I'm going to revisit an earlier entry of his, Return of the Space Bats.  In it, Greer reminisces about his favorite genre of science fiction and how it might be useful for telling narratives about the future that he sees coming.  He then challenged his readers to a science fiction short story contest taking place in a post-collapse future.  While I'm a science fiction fan, I'm working for a different future than what he expects.  That didn't stop me from participating.  After all, in the very first post, I promised "expect digressions about post-apocalyptic science fiction."  Follow over the jump for the conversation.

Here's the passage that elicited my first response.

"Some seventeen notable empires rose in the Middle Period of Earth. These were the Afternoon Cultures. All but one are unimportant to this narrative, and there is little need to speak of them save to say that none of them lasted for less than a millennium, none for more than ten; that each extracted such secrets and obtained such comforts as its nature (and the nature of the Universe) enabled it to find; and that each fell back from the Universe in confusion, dwindled, and died.

“The last of them left its name written in the stars, but no-one who came later could read it. More important, perhaps, it built enduringly despite its failing strength—leaving certain technologies that, for good or ill, retained their properties of operation for well over a thousand years. And more important still, it was the last of the Afternoon Cultures, and was followed by evening, and by Viriconium.”

Those are the opening lines of The Pastel City by M. John Harrison, one of the fixtures of my arguably misspent youth. I pulled it down from my shelf of old paperbacks the other day, for the first time in years, and spent part of an evening rereading it. There were several reasons for that. Partly it was a fit of nostalgia; partly, I’ve finished all but the last minor edits on Star’s Reach, my post-peak oil SF novel, preparatory to placing it with a publisher, and was thinking back on some of the other fictional explorations of the coming deindustrial future I’ve read; partly—well, there’s a practical reason, but we’ll get to that a little later on in this post.

There were any number of books like it back in the day, mass-market SF paperbacks with gaudy covers ringing variations on a handful of familiar themes. You could almost describe The Pastel City as an example of what used to be called the sword and sorcery genre, one of the standard modes of 1970s fantasy, except that there isn’t any sorcery. The weird powers and monstrous enemies against which tegeus-Cromis the swordsman and his motley allies do battle are surviving relics of advanced technology, and the deserts of rust and the windblown ruins through which they pursue their fairly standard heroic quest are the remnants of an industrial society a millennium dead. In a real sense, it belongs to a genre of its own, which I suppose ought to be called postindustrial fantasy.
...
The Pastel City was one of those. I recall vividly the first time I read it, because it’s the book that first suggested to me that an industrial society could crumble away to ruins without benefit of apocalyptic fireworks and be succeeded by simpler societies. What was more, the last Afternoon Culture was simply backstory, no more immediately relevant to tegeus-Cromis and his friends than the fall of Rome is to you and me, and the wastelands, the marshes gone brackish with metallic salts, the dead and half-drowned city called Thing Fifty, and most of the other relics of that vanished time were just part of the landscape. It was easy for me, as I sat there on the couch, to imagine the wreckage of today’s world forming the background for adventures a thousand years in our own future.

I began my response by praising his choice of a name for this genre.

"The weird powers and monstrous enemies against which tegeus-Cromis the swordsman and his motley allies do battle are surviving relics of advanced technology, and the deserts of rust and the windblown ruins through which they pursue their fairly standard heroic quest are the remnants of an industrial society a millennium dead. In a real sense, it belongs to a genre of its own, which I suppose ought to be called postindustrial fantasy."

Oh, that's an interesting name for a genre that didn't have one before.

I went looking for The Pastel City and found it listed in Wikipedia under Dying Earth and Post-apocalyptic Science Fantasy.  The genre already had a name, but Greer's is both more concise and more fitting to his agenda.

I continued by adding my suggestions.

First, "Star Man's Son" by Andre Norton.  It was a standard post-apocalyptic adventure, set 300 years after a nuclear war, but it really read more like a fantasy adventure.  That was a common trait of Norton's.  She really had a great talent for weird settings with fantasy elements, but she placed a lot of her fiction out in space, so it was classified as science fiction.

Second, "Hiero's Journey" by Sterling Lanier, set millennia after another nuclear war.  It has all the elements of a fantasy heroic quest, but each of the fantastic features are all explained scientifically.  Also, it was published after The Club of Rome, and the author took the conclusions of that study to heart, setting the nuclear war as a one over resources once they peaked and began to run out.  He also incorporated global warming, as the story takes place around what is now the great lakes, but has become a tropical forest around an inland sea.

Finally, I have some foreign media, the Japanese cartoon (anime) "Scrapped Princess."  It starts off like a high fantasy, but the truth behind the facade peeks out early with the spell circles looking like semiconductor circuit diagrams.  It turns out that the magic comes from nanotechnology and AIs.  Oh, and the space bats appear, but they set people back to medieval technology instead of allowing humanity to continue advancing technologically.  They decided that humans were too much of a threat.

Pinku-Sensei, I've read the first two -- anime zipped right on by me, for a variety of reasons. I wasn't that impressed by Hiero's Journey -- "interesting but hamfisted" was pretty much my reaction -- but Andre Norton was a major fave of mine back in the day. Did you ever read her Breed to Come? A very strange posthuman postapocalypse story...

I thought Greer had some good points.

In retrospect, you're probably right.  I have the feeling that it hasn't aged well.

"Did you ever read her Breed to Come? A very strange posthuman postapocalypse story..."

The one with the intelligent cats?  Yes, I did.  In fact, it was one of my favorites of hers and one in which she handled the implications of the science well instead of just hand-waving them.  It was definitely not fantasy.

Pity he hadn't ever seen "Scrapped Princess."  Here's what I wrote about it on my LiveJournal three years ago.

One of my favorite anime series is Scrapped Princess, which was the first running series at University of Michigan's Animania that I saw all the way through at club meetings. Its TV Tropes entry calls it "one of the better series you're probably not watching." I agree. It's in the top 5-10% of all anime I've watched and I've watched a lot of anime. I've even called it "The best series that no one so far doing this meme seems to have watched."

I concluded by changing the subject to tie back into a theme of Greer's that I commented on in Perspectives on the next doomsday from The Archdruid and me, and that Greer revived in the following passage.

The third book I want to mention here didn’t come to my attention until long after the secondhand couch went out of my life, but it came at another bleak time. That was the autumn of 1982, toward the end of my first unsuccessful pass through college, and right about the time it was becoming painfully clear that the great leap toward a sustainable future through appropriate technology, in which I planned on making my career, wasn’t going to happen after all. Those were the years when the Reagan administration’s gutting of grant money for every kind of green initiative was really starting to hit home, and attempts to mobilize any kind of support for those initiatives were slamming face first into the simple fact that most Americans wanted to cling to their cozy lifestyles even if that meant flushing their grandchildren’s future down the drain.

I agree with Greer that was a turning point, and a bad one at that.

On another point, your comment about Americans deciding in 1980 that they'd rather have their comfortable lifestyles than a sustainable future for their grandchildren rings so true.  That election was a major turning point, and decades of reflection upon it has made me despair that it could have turned out any differently, not like the 2000 election.  Even the election of Al Gore then would not have made a difference, not without a Congress that would have gone along with him, which he wouldn't have had.  Sigh.

Greer responded to my despair.

Pinku-Sensei, I think 1980 could have turned out differently, though it's a stretch. Still, all that's gone whistling down the wind of might-have-beens...

And that's where I left things.  Despite what I wrote about being interested in Greer's science fiction contest, I'm not going to participate.  I would rather imagine a different possible future, one that does not accept the inevitable decline of our civilization starting about now.

Returning back to the first thought of this entry, my comment on Greer's latest essay still hasn't been approved.  Let's hope it does and he has one of his trademark thoughtful responses to it.  Even if it isn't, I still have it saved to post later.