The practicality and esthetics of LED streetlights

One technology that I’ve been telling my students is coming is LED, which will replace fluorescent bulbs, which have themselves been taking over from incandescent lights for most of this century.  The technology’s acceptance in one application shows my prediction is already becoming reality.  As KPBS reported on Tuesday, January 28, 2014 3,000 San Diego Streetlamps Getting LED Upgrade.


The city of San Diego and General Electric announced Tuesday that a program to replace 3,000 streetlamps around the downtown area with energy-efficient LED lighting is underway.

The new lights are expected to shine brighter while saving the city $254,000 annually in utility costs.

A digital system will provide status updates on the condition of the lights, and allow the Environmental Services Department to adjust the brightness of individual lamps.

In addition to saving money, the light cast by the LED streetlamps is more balanced.  That’s generally good, but it will have unintended consequences.  Geoff Manaugh explains in Gizmodo How LED Streetlights Will Change Cinema (And Make Cities Look Awesome).


The decision by the city of Los Angeles last year to replace its high-pressure sodium streetlights—known for their distinctive yellow hue—with new, blue-tinted LEDs might have a profound effect on at least one local industry. All of those LEDs, with their new urban color scheme, will dramatically change how the city appears on camera, thus giving Los Angeles a brand new look in the age of digital filmmaking. As Dave Kendricken writes for No Film School, "Hollywood will never look the same."

Here’s one of the images he used making his point. 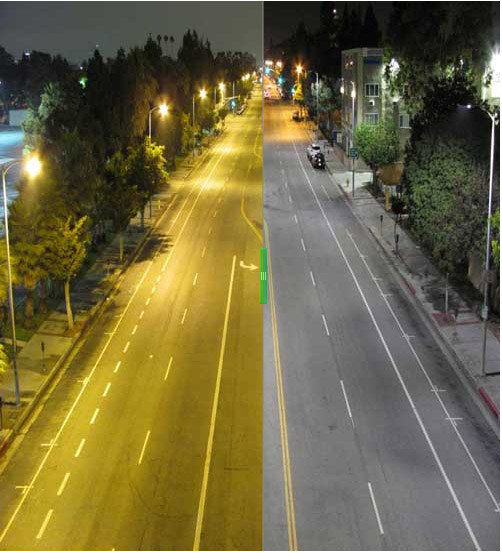 His essay also makes two points of mine: Everything is connected to everything else and there is no free lunch.
Posted by Pinku-Sensei at 9:01 AM