A Detroit funny from Wonkette and Deadline Detroit

At the end of last week’s Derp Roundup: Your Weekly Waltz Through A Wonderland of Weird, Doktor Zoom included this bit of old but funny piece of performance art that happened this summer in downtown Detroit.

And finally, this make-of-it-what-you-will story of a beautiful prank in Detroit. It happened last summer after the city declared bankruptcy, but at Derp Roundup, we feel no obligation to deprive you of stuff just because someone sent a tip long after something happened (on the other hand, please don’t do that). See, Detroit has this big statue commemorating Joe Louis, and it’s a mighty fist:

Well, OK, maybe a little context? Fist First off, it’s not a photoshop; the artist “Jerry Vile” installed the can of Crisco as a comment on the inevitable pain that the bankruptcy would cause the city. Sadly, it was removed as “abandoned property” by 2:00 of the afternoon he dropped it off. Some people got no sense of humor.

The full original story is at Deadline Detroit and includes this gem. 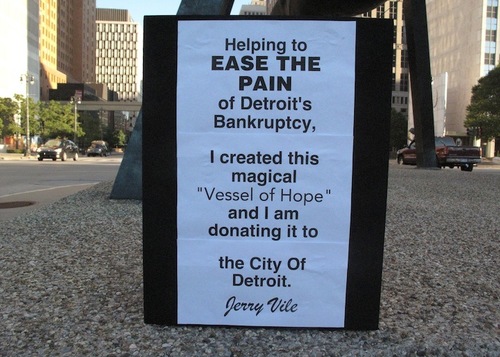 I should read Deadline Detroit more often.
Posted by Pinku-Sensei at 12:00 AM