Did you know Ragnarok is today?

I didn’t.  But the International Business Times did.  Here’s what it has to say this predicted put not well-publicized non-event*: Viking Apocalypse Ragnarok: End of the World Predictions that Never Came True.


Viking apocalypse will cause end of the world on February 22 with Ragnarok, according to an ancient prediction in Norse mythology.

Vikings, the people of the Norse culture (793 to 1066 AD) in Scandinavia, called their apocalypse prediction Ragnarok, which coincides with the grand finale of York's 30th Jorvik Viking Festival that celebrates the city's Viking heritage.

Ragnarok, or Doom of the Gods, is described in Viking mythology as the catastrophic event where the nine worlds that make up the cosmos are destroyed.

It is a prophecy about the end of the world in which all the Viking gods including Odin, Thor, Tyr, Freyr, Heimdallr, and Loki, will fight in a great battle following which the world will submerge in water to resurface afresh with two human survivors.

Like any other previous mythical doomsday predictions, Viking apocalypse will also see a new sunlight the next morning. Cataclysmic events like floods, bad weather, volcano or earthquake can affect only parts of the world but the end of life on earth is not foreseen for several decades.

The Jorvik Viking Festival has a countdown clock to the end of the festival, which is also the onset of the Gotterdammerung.  As I type this, it’s just dropped below 20 hours.  That’s barely enough time for the performance of the entire Ring Cycle, which takes 15 hours.  I’ll just cut to the chase and embed the final scene: Götterdämmerung (19/19) - Wagner, "Ring" Akt III - Finale Erlösungsmotiv - Valencia 2008.


Now I see where the saying “it isn’t over until the fat lady sings” comes from.

*I wrote that I’d follow through with the promise I made in Steampunk fans ejected from San Diego area mall to post entries about the other links that tie into conversations with The Archdruid today.  In an odd way, dealing with this shiny thing that dropped into my lap qualifies, as the fake Norse Doomsday would have made a good next date after 2012, but was never even mentioned in Perspectives on the next doomsday from The Archdruid and me.  I guess 2/22/2014 was too close to 2012, making 2030 more attractive.  As for the other links, I'll get to them either later today or tomorrow.

This concludes your dose of DOOM for today.


ETA: Since Facebook insists on showing this image in its preview, I'll put it back in the entry.  I'd removed it because I was worried that the topless Valkyries in the painting might violate Facebook's Terms of Service.  However, since it's Facebook's own software that is displaying it, I'll just play along and re-insert it under this cut. 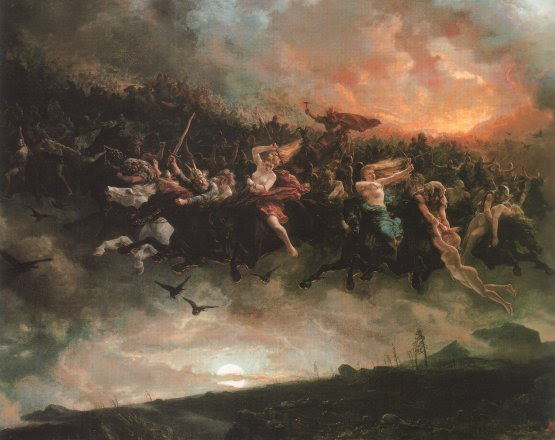