Real corn pone fascists among us in Michigan 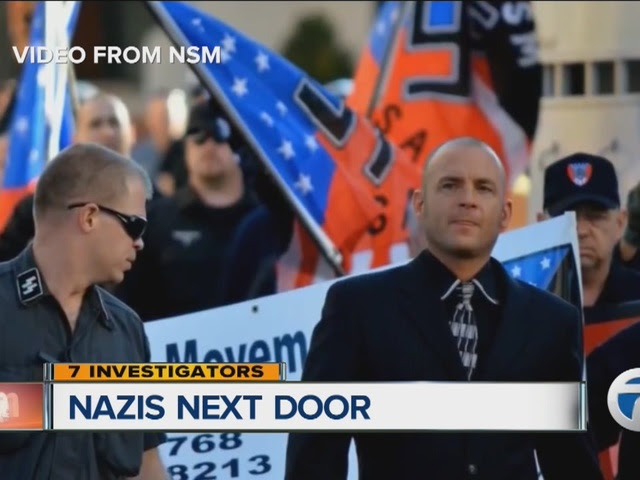 I embarked on the project of matching up links to items on my desktop and in my files to conversations with The Archdruid because I got a little overwhelmed after posting The Archdruid on Fascism, part 1.  After having dealt with my “I can’t be all DOOM all the time” mood, it’s time to close the circle and deal with articles about Neo-Nazis here in Michigan.

To be the "largest neo-Nazi group in the United States" is kind of dubious distinction. After all, what does it mean really? That you have a few dozen mouth-breathers on your mailing list?

And it's not like these things ever end well. A couple years ago, a neo-Nazi leader in California was killed by his own 10-year-old son. Frank Collin, the "Illinois Nazi" who wanted to march in Skokie, turned out to be a pedophile. Also, these dummies want to be Nazis. That's just always bad.

It turns out the largest neo-Nazi organization in the U.S. is based in Detroit and run by an Eastpointe resident named Jeff Schoep.

Deadline Detroit then links to WXYZ’s Nazis Next Door: Michigan is home to largest Neo-Nazi group in U.S.

The National Socialist Movement is the largest Neo-Nazi group in the United States.They display swastikas in their rallies and marches. The NSM lists its headquarters as a P.O. Box inside a post office on Detroit’s East Side.
...
The NSM may be the biggest Neo-Nazi group in Michigan, but it’s not the only one.

The American Nazi Party is headquartered in the all-American city of Westland.
...
Researchers at the Southern Poverty Law Center say hate groups across the country are on the rise.  In 2000, they counted 600 groups.  In 2012, that number had grown to 1007.

Michigan has 25 known hate groups, and experts say our state has long history with the extreme right.  During the 1920’s Detroit had more than 60,000 members of the Ku Klux Klan.

That’s not all.  Crooks and Liars brings its readers the tale of James Laffrey and His Call to Assassinate Jews.

James Laffrey has not been publicly advocating ethnic hatred for very long. He does not appear to have many, if any, followers. He is not particularly well-connected to more established entities on the anti-Semitic far right. But what he does have is a website and plans to create a white supremacist political party called Whites Will Win.

Laffrey, a middle-aged man who appears to be based in Michigan, has caught people’s attention with the bloodcurdling nature of his agenda: he openly calls for the assassination of Jewish people by their white neighbors.

Ugh.  There’s only one piece of good news.

Laffrey has generated little attention outside the white supremacist realm, but he has drawn notice within it. However, a number of his fellow white supremacists have indicated they resent his entry into anti-Semitic organizing without having established himself first in the community. Laffrey appears to have little following, with only slight web traffic, and no financial support.

This man may not self-identify as a Neo-Nazi or fascist, but if it looks like a duck, walks like a duck, and especially quacks like a duck, it’s a duck.  If he’s a goose instead, then I have another conversation to associate him with, one about Satanism.  On that note, here’s what I have to say to all these people: Go to Hell!  In the case of Laffrey, I have one other thing to say: Seek help.  A lot of the people commenting at Crooks and Liars think you’re ill.

As for the rest of us, be warned.  The reason that Kunstler, Greer, Crooks and Liars, Deadline Detroit, and WXYZ warn us about “corn pone Nazis,” the return of fascism, and Neo-Nazis who are our neighbors is that people like these can become a real threat, however pathetic they seem now.
Posted by Pinku-Sensei at 7:44 PM