Discovery News on 'Her' 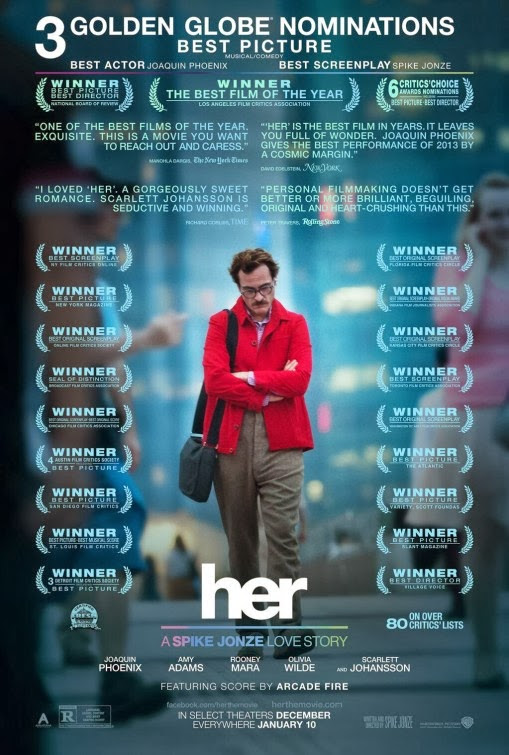 It's time to make another installment payment on the promise I made in Politics, science fiction, and fantasy at the Golden Globes to "get back to all of you tomorrow after the winners are announced."  I promised again in Science fiction and fantasy at the Razzies, when I used "the excuse that I'll do so in the context of the announcement of the Oscar nominees in the morning, when nearly all the Golden Globe winners and most of the nominees for film should make the cut."  I made a small down payment with 'Blackfish' snubbed by Oscars.  Now it's time to talk about one movie that actually was nominated, "Her."

"Her" And The Future Of Artificial Intelligence

In the movie "Her," a man falls in love with his digital assistant, which raises the question: are we close to having a supercomputer that can recreate functions of the human brain? Anthony draws out the history of artificial intelligence, discusses some recent supercomputer achievements, and shares his hopes for an "almost human" AI in our lifetime.

This movie won best screenplay at the Golden Globes, so that's an encouraging sign.  As for what it's nominated for at the Oscars, the voters of the Academy have seen fit to consider it for Best Film, Best Original Score, Best Original Song, Outstanding Production Design, and Original Screenplay.  Of those, I'm most optimistic about Original Screenplay.  It's not going to win Best Film against this competition, although I think it has a very good chance at Worldcon for best science fiction media.  It's up against "Great Gatsby" for Production.  Good luck beating that.  Finally, I reserve judgement on the music categories, where I actually might know what I'm evaluating.  I not only called the winner at the Golden Globes, but I made the following prediction about "Atlas" by Coldplay from "Catching Fire."

I appreciated the astonomical theme of the video, including the cameos by the Mockingjay as a constellation, but I found the song inferior.  Just like the the song nominee from "The Hunger Games" last year, I do not expect this to get an Oscar nomination.  If it does, it won't win.

It was not among the nominees for the Academy Awards.

I'll have more on science fiction, fantasy, politics, sustainablity, and crime at the Oscars later.
Posted by Pinku-Sensei at 7:16 PM