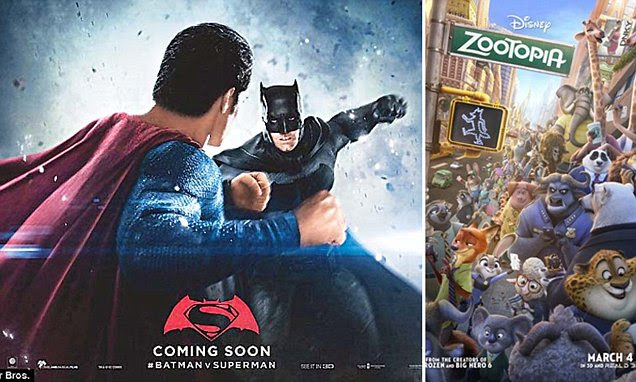 Two weeks ago, my entertainment headline read "Zootopia" remains on top of the box office for a second week after displacing "Deadpool."  I anticpated this week's this morning when I concluded A drum corps 'Superstar' for Easter with "I expect a changing of the guard at the box office as 'Batman vs. Superman: The Dawn of Justice' should topple 'Zootopia.'"  That happened, as Forbes reported 'Batman V Superman' Box Office: 'Dawn Of Justice' Opens With Mostly Super $170.1M Weekend.


The much-discussed/much-debated/much-anticipated Batman v Superman: Dawn of Justice opened this weekend with a whopping $170.1 million domestic bow. So, riddle me this, Batman: When is a $170.1m debut weekend not entirely cause for unmitigated celebration?  Answer: When it is started by an $82m Friday. In terms of pure weekend numbers, that’s the biggest opening weekend of 2016 thus far and the 6th biggest opening of all time and the biggest DC Comics debut ever. $18m of that came from IMAX, $17m came from PLF auditorums, and 40% came from 3D auditoriums. At the very least, Warner Bros. is breathing a massive sigh of relief this morning.

The film was panned by critics and it doesn't have the best word of mouth, but it still made a lot of money, enough to justify a sequel and a Wonder Woman film, both of which are already in the works.  The bad news is if it continues to make money, or if it fades quickly.  It will probably do well for another couple of weeks, as Forbes notes.


Even if word of mouth is poor from general audiences (or at least heavily mixed), there is little-to-no competition for the first 14 days of release. God’s Not Dead is the only new wide release next week and the week after that sees Melissa McCarthy’s The Boss while the week after that sees Walt Disney’s The Jungle Book. The film’s fate will be set by the time The Huntsman: Winter’s War drops into theaters on April 22nd.

I expect I'll post about the next changing of the guard the Sunday after "The Jungle Book" debuts.

Follow over the jump for how the rest of the speculative fiction movies still in theaters fared.


Walt Disney’s Zootopia wasn’t afraid of no Batmen or Supermen, as the blockbuster toon earned another $23.1 million in its fourth weekend. It dropped 38% in weekend four, which is as solid a hold as you can hope for against a major new film in the marketplace. The film has now earned $240.5m domestic, out-grossing every Walt Disney animated feature (non-Pixar) outside of The Lion King and Frozen (not adjusted for inflation of course). It’s the twelfth-biggest Disney animated film even if you count the Pixar movies and will pass Cars ($244m) and Toy Story 2 ($245m) in the coming days. Oh, and it has earned a whopping $456m overseas for a $696.7m worldwide total.

Holding up less well was The Divergent Series: Allegiant. The sequel dropped a sad, but unsurprising, 67% on its second weekend for a $9.5 million gross and a $46.4m cume. For comparison, the first two Divergent films opened with $54m and $52m respectively and had ten-day totals of $94m and $85m.

Last week, the film got no higher than second with a "$29.1 million debut. Simply put, that is 46% off Divergent‘s $54.6m opening weekend back in March of 2014 and 44% off Insurgent‘s $52.2m weekend debut last March."  Ouch.  No wonder I didn't write about it last weekend.  This weekend, it tied with "Miracles from Heaven" for fourth and was behind "My Big Fat Greek Wedding 2," which came in third.

I have two more films to update in sixth and seventh.


10 Cloverfield Lane earned $6 million in its third weekend (-52%) for a $56m 17-day total for the $15m Paramount/Viacom Inc. thriller. Deadpool also weathered the dawning of the justice with around $4.8 million weekend (-40%) for a new $349.2m cume. I’ll update accordingly if it comes to pass, but the Ryan Reynolds superhero film may well have passed Warner’s The Matrix Reloaded ($742m worldwide) to become the biggest R-rated movie ever globally, although it will fall short of The Passion of the Christ’s $370m domestic total. The #2 R-rated grosser in America, American Sniper, is about to become the #3 R-rated grosser.

Good work, "Deadpool."  Your film may beat out Batman and Superman's film foray this year at the awards shows.  In fact "Dawn of Justice" may end up with the same kind of dubious distinction "Fifty Shades of Grey" earned--nominated for both an Oscar (Special Effects) and at least one Razzie (Worst Reboot/Ripoff/Sequel).

Next, How to make the Wonder Woman - Tipsy Bartender.

This is the prettiest shot ever...THE WONDER WOMAN! You can't go wrong with a layered shot--when done successfully, they're badass! And this one is so much fun, especially if you're a fan of superheroes! This one is inspired by Wonder Woman and her love of the primary colors. Comprised of red, yellow, and blue, it's a strong but sweet shot. Drink one of these and you'll be ready to save the world!
...
WONDER WOMAN
Grenadine
Limoncello
UV Blue Vodka
Peach Vodka

Unfortunately, Skyy doesn't have a Batman drink--yet.  I left a comment suggesting that he find a recipe for one and make a video with a model wearing an costume of a female member of Gotham's Rogues Gallery, such as Catwoman, Poison Ivy, or Harley Quinn.  Let's see if he does.  If he doesn't, I can find recipes for Batman cocktails from other channels.
Posted by Pinku-Sensei at 12:00 AM