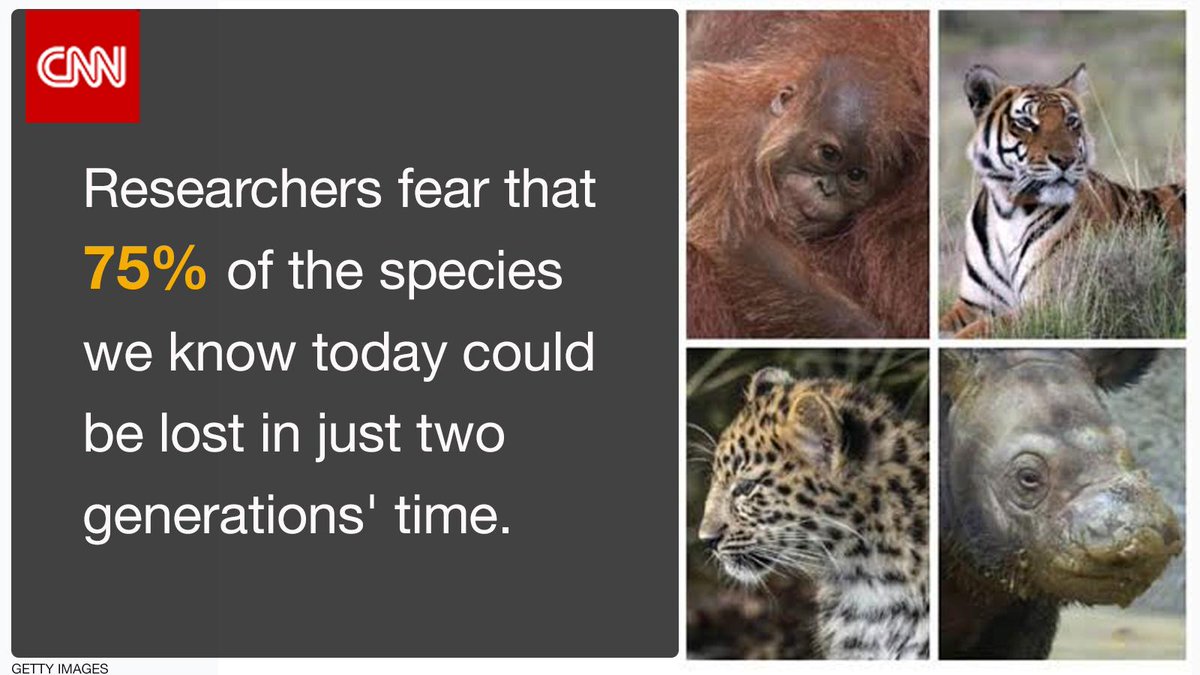 "Stay tuned for the nominees in Outstanding Science, Medical and Environmental Report tomorrow" was my closing for Space, Ebola, volcanoes, stroke, and human expansion the topics of Science and Technology Documentary nominees.  It's tomorrow, so it's time to review the nominees in this category.

The first one listed at the National Academy of Television Arts & Sciences website is "Vanishing: The Earth's Sixth Mass Extinction" from CNN Digital.

We're entering the Earth's sixth era of extinction -- and it's the first time humans are to blame. CNN introduces you to the species that are already going.

As I've written before, the sixth mass extinction is likely underway with humans as the asteroid.  While that's depressing news, I'm glad that CNN is covering it and being recognized for doing so.

I continue with "Standing Rock and the Battle Beyond," an episode of Fault Lines on Al Jazeera International USA, which is about how oil and water don't mix.

Fault Lines reports on the battle for Native American land rights as protests continue against the Dakota Access Oil Pipeline. Are tribal rights being pushed aside for profit?

Al Jazeera America has closed and had its final Emmy nominations, but Al Jazeera English lives on.  I'm glad to see that it is still covering controversial news stories in the U.S. with as unstinting an eye as ever.  I'm also glad that this segment made me focus on Standing Rock and the Dakota All Access Pipeline.  I've only mentioned it once in Yesterday was a good day for pipelines, a bad one for environmentalists.  It probably deserved more attention from me.

I have an entire episode of Hello World on Bloomberg Television in "Hunting for the Origins of the Universe in Chile's Desert" embedded below.

Chile may not jump right to mind as a technology hub. But it turns out that Chile is home to some of the world’s largest and most extraordinary technology projects, stretching from Santiago to the Atacama Desert. Hello World’s host Ashlee Vance traveled to Chile for two weeks to explore the country’s tech scene.

It's amazing what an investment in science and technology can do for a country.

Just as the last nominee had no trailer, neither does "The End of AIDS?." Instead, I'm posting the first segment of this series on PBS NewsHour.

There’s still no vaccine and no cure, but the medical community is increasingly focused on ambitious plans to bring about an end to HIV/AIDS. The NewsHour launches its series, “The End of AIDS?” with a look at intense prevention efforts underway in one of the cities most impacted by the epidemic, San Francisco. William Brangham reports with support from the Pulitzer Center on Crisis Reporting.

My coverage of HIV/AIDS has been light, consisting of celebrating World AIDS Day twice.  I'm glad the News and Documentary Emmy Awards have made me focus on the disease again.

I return to water with "Toxic Lake: The Untold Story of Lake Okeechobee" from The Weather Channel.

Over the last two decades, the environmental crisis of Florida’s Lake Okeechobee has continued to worsen and dominate local headlines. The lake is the nation’s second largest freshwater lake, but due to years of missteps, it’s been producing massive amounts of toxic algae that have closed beaches, destroyed businesses and poisoned swimmers.

The project breaks down the many elements of a complicated issue. "Toxic Lake" is hosted by Weather Channel meteorologist Kait Parker. The article, available at Toxiclake.com, was written by Pulitzer Prize-winning reporter Marcus Stern.

“Toxic Lake” is the latest endeavor by The Weather Channel to explore the intersection of weather, the environment and social justice.

Yes, that's the entire segment.  If it wins, I'll just have to post it all over again.