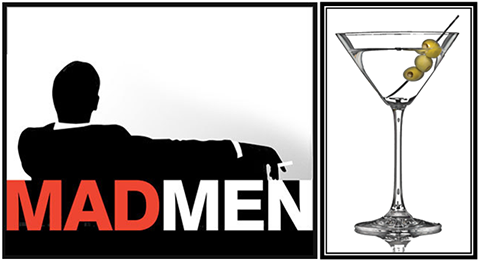 I had something else planned for tonight's entertainment entry, but I'm not feeling it.*  Last week, it was the season finale of "The Walking Dead."  Next Sunday it will be "Game of Thrones."  So I decided to go with the big television event of the night along with my "I can't be all DOOM all the time and present drink recipes from Tipsy Bartender inspired by "Mad Men."

Follow over the jump for two recipes from three years ago.

First, here's How to make the Brandy Alexander.

This drink is ol' school but it's still a crowd pleaser...THE BRANDY ALEXANDER! This is one that appears frequently in the TV show Mad Men, as it was a popular cocktail during that time period. It's creamy and potent, and has a kick of spiciness with the nutmeg garnish. If you're into retro drinks, try this one out!
...
RECIPE:
=======
3/4oz Brandy
3/4oz Creme de Cacao
3/4oz Cream
Nutmeg

Next, How to make the Blue Hawaiian Cocktail

You don't know tropical and fun until you've tried...THE BLUE HAWAIIAN! We love Mad Men! And we especially love all the old, classic cocktails the characters drink, which is why we're showing you guys one of our favorites today! The Blue Hawaiian has several different variations, but this one is the BEST! It's got the traditional, beautiful light blue hue, a kick of rum, the fruitiness of pineapple juice, and a dash of sweetness from cream of coconut! Taste the 60's!
...
RECIPE:
=======
1 oz blue curaçao
1 oz light rum
1 oz cream of coconut
2 oz pineapple juice

Those of you who are watching "Mad Men," enjoy the show.  One of these days, my wife and I will binge-watch it, but not tonight.  I have work to do.  I'll be back after I finish.

*I was thinking of posting "'Interstellar' and 'The Last Man on Earth': from the sublime to the ridiculous."  Cool idea, but some other Sunday.