I posted Driving update for February 2015: Dez on February 9th, 61 days ago.  That was when the new car turned over 45,000 miles.  As I type this, her odometer reads 45,885, which would normally suggest that the next update would be a few weeks away.  However, by the time this entry posts, my wife and I will have driven our car to Mount Pleasant and back to drop off a pair of dogs we rescued yesterday from a shelter in Flint.  That's a round trip of 280 miles, so Dez's odometer will have rolled over 46,000 miles by the end of the day.

Based on the projected mileage for today, driving 1,000 miles in 61 days translates to 16.39 miles per day and exactly 500 miles per standard month of 30.5 days.  That's quite a lot more than the average of 11.63 miles/day or 354.7 miles/month for the previous update for Dez.  Then again, that's what happens when my wife and I take special trips of first 110 miles round trip to Flint and back and then 280 miles to Mount Pleasant and back.  Rescuing abandoned pets is a cause as dear to us as the environment, so it became a matter of priorities.

Our behavior fits in a larger trend of increased driving by Americans.  I concluded the previous update for Dez by noting "at this rate, Bill McBride of Calculated Risk thinks the U.S. might set a new high this year."  That happened, as his most recent report on March 25, 2015 read Vehicle Miles Driven increased 4.9% year-over-year in January, Rolling 12 Months at All Time High.  Here's the graph. 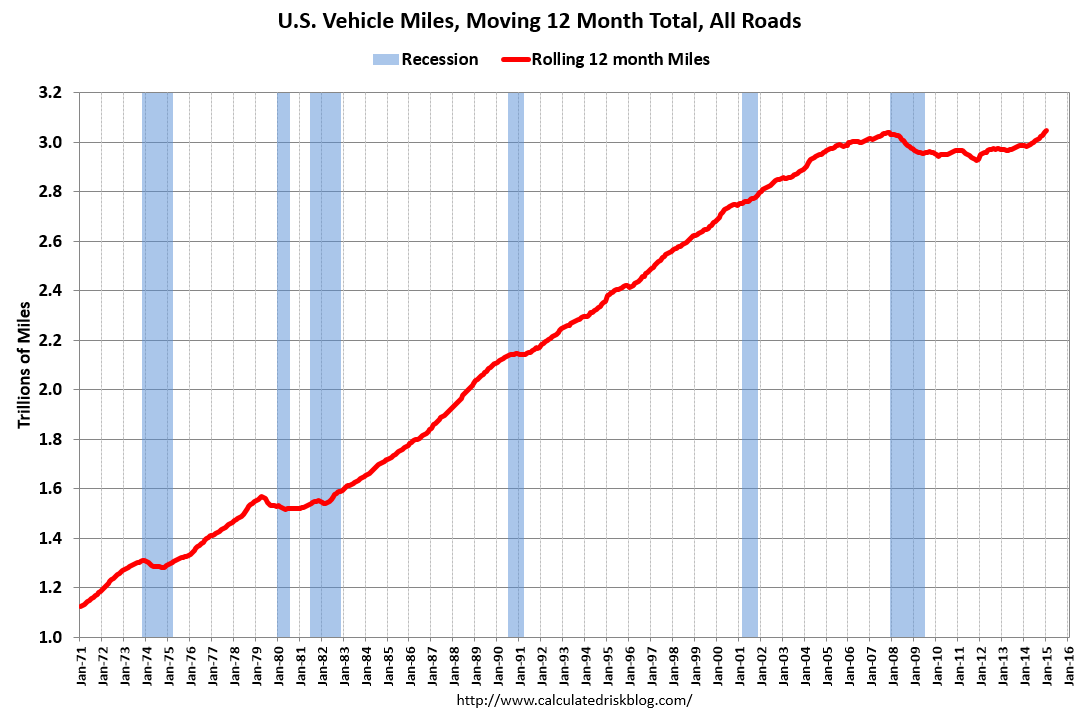 It took seven years for Americans to drive as much in 12 months as they did during all of 2007.  That's a record.

Bill McBride credits lower gas prices, as do I along with increased prosperity.  Here's what I had to say about the situation in Driving update for March 2015: Ruby.

[I]t looks like the second half of 2014 show[s] a distinct reversal of the long-term trend.  The miles driven per driving-age person are starting to go up.  I'm sure that's because of the much cheaper gas year-over-year I've been documenting since July of 2014 and sort of predicted in December 2013.  If so, that should go away once gas becomes more expensive.

Gas is still relatively cheap, so I don't expect the trend to let up any time soon.  As I'm fond of writing, stay tuned.
Posted by Pinku-Sensei at 8:00 PM