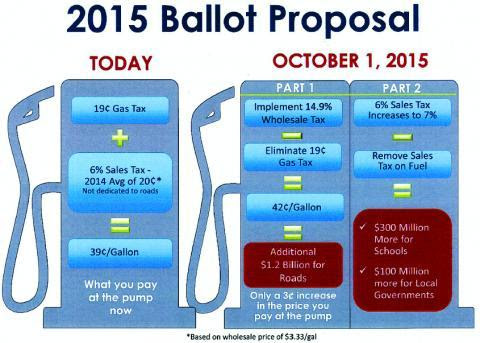 My latest at Examiner.com: Washtenaw County politicians divided along party lines on Proposal 1.


Last year, ninety-five percent of Democrats and seventy percent of Republicans in Michigan's legislature voted to place Proposal 1 on the ballot.  Normally, that would indicate broad bipartisan support for the measure, which would increase the sales tax by one percent to fund improvements to the state's roads and trigger ten other laws if passed.  A survey of current Michigan legislators and the conflicting endorsements of Washtenaw County's Democratic and Republican parties suggest a strong partisan division instead.

As reported by WXYZ, only thirty one (21%) of Michigan lawmakers contacted by the Associated Press responded to a survey of their stands on Proposal 1.  Crain's Detroit Business calculated that twenty-three of them were Democrats, all but one of whom announced their support for the constitutional amendment, while only eight were Republicans, five of whom opposed the measure.

Washtenaw County's state legislators were more forthcoming in their responses than for their colleagues as a whole, but they still mirrored the partisan trends.  Four of the county's five Democratic legislators responded to the survey, all announcing their support.  The response of Adam Zemke, State Representative from Ann Arbor, was typical of the group.  WXYZ quoted Zemke as saying "I support Proposal 1 because it is a good solution to raise the funding needed to fix our infrastructure that simultaneously holds education, local government and the working poor harmless. It also constitutionally further protects transportation and education funding, both things that I continue to hear from constituents about."

More at the link in the headline, including the stands of the County's other State Representatives and State Senators along with the official positions of the county Democratic and Republican parties.


Two weeks ago, I wrote Michigan roads are terrible but Proposal 1 still in trouble.  The numbers bear this out, as MLive's headline on the most recent poll on the measure read Poll shows strong opposition to Prop 1, grows when read ballot language.  Opponents led supporters 66% to 24%.  Opponents grew to 71% when read the ballot language.  As a supporter of the proposal, however lukewarm, I say EEP!

Contrast those poll numbers with these: Michigan poll shows 51% support for marijuana legalization, taxation and regulation.  It looks like I was on to something when I left this comment on She's Back!


As for the ostensible good times returning, the unemployment statistics and other official measure say so, but the people don't seem to believe it, except when it comes to increased driving.  The spell of relatively cheap gas has induced Americans to drive more during the past 12 months than at any time since before the Great Recession.  On other hand, the people here in Michigan have terrible roads to drive over.  They have the opportunity to raise the sales tax to pay for road maintenance, but the highways aren't so bad yet that Michigan voters are likely to approve the increase.  Instead, what they seem more enthused about is legalizing marijuana.  I guess they accept what Freewheeling Ferdinand [Franklin] of the Fabulous Furry Freak Brothers said more than 40 years ago, "dope makes it easier to get through times of no money than money makes it easier to get through times of no dope."

Just like I got Freewheeling Franklin's name wrong the first time, I seem to have messed up his quote, although no one corrected me on that.  Here's Franklin to set me straight. 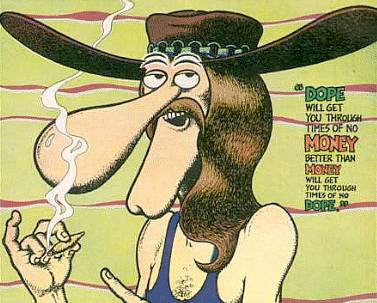 As for Proposal 1, stay tuned.  I'll be covering the election results one week from today.

Crossposted to Michigan Liberal.
Posted by Pinku-Sensei at 10:23 AM