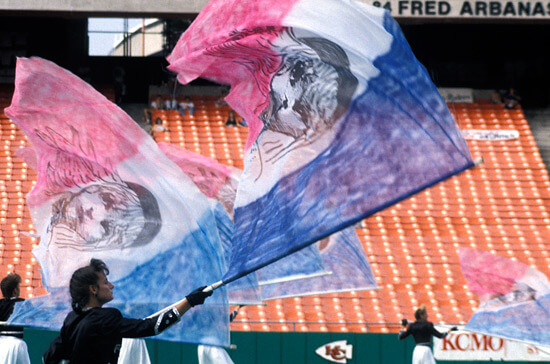 Happy Bastille Day!  For the fourth year in a row, I am celebrating today as another drum corps holiday.  Three years ago, I featured Phantom Regiment's "City of Light" show.  Two years ago, I shared Cadets and Cadets 2 playing "Les Miserables."  Last year, I made it a double celebration by telling my readers to Drink to a drum corps Bastille Day 2018 with the Santa Clara Vanguard.  This year, I'm featuring the same corps that I did for May Day, the Boston Crusaders.

While The Cadets may have been the first corps to play selections from "Les Miserables" at DCI finals, they weren't the first Division I/World Class drum corps to use songs from the musical in a field show.  That distinction belongs to the Boston Crusaders, who played did so in 1988.*

Boston Crusaders included music from "Les Miserables" in the corps' 2011 show, but none of it made its way into the official clip from Drum Corps International.  Instead, the clip features the "1812 Overture," which, while it includes "La Marseillaise," celebrates a French strategic defeat at the hands of the Russians — not something France would enjoy being reminded of on the country's national day.

For as complete a video of the show, including almost all of "Les Miserables," as exists on YouTube, I'm sharing Boston Crusaders Full Run Through.

Boston Crusaders full run through on August 4, 2011. Their show this year is entitled "Revolution" I apologize for the wind. This run-through does not include the epic baritone solo. :(

ETA: Found another video of 2011 from the Boston Crusaders official YouTube channel that does include music from "Les Miserables."

Follow over the jump for a drink for National Grand Marnier Day.

Just like I went back for a classic oldie from the Boston Crusaders today, I'm pulling a video deep out of the vault from Tipsy Bartender, How to make the B-52 Shot from 2011.

A popular shot.....THE B-52!  This drink is awesome as a layered drink, though often served at bars as a mixed drink.  We show you both ways here!
...
B-52 SHOT
1oz Kahlua
1oz Baileys
1oz Grand Marnier
Make sure to layer it in order: Kahlua, Baileys and Grand Marnier!

Enjoy the double celebration and remember to drink responsibly!

*The 1987 Blue Stars beat everyone to the punch, but they were a Division III corps at the time.
Posted by Pinku-Sensei at 12:21 PM