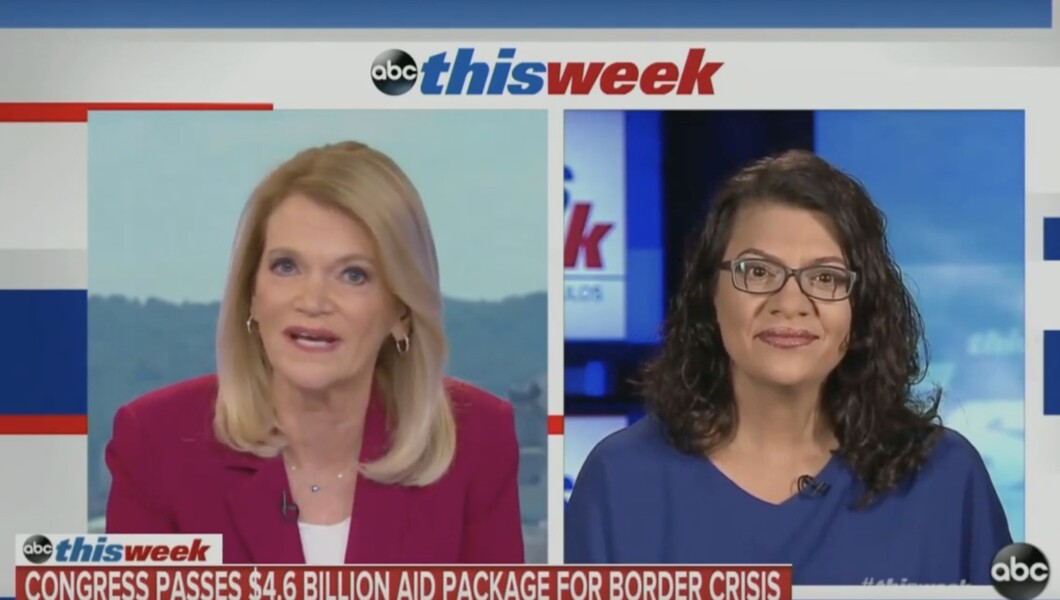 While immigration played a passing role in Colbert, Meyers, and Noah take closer looks at Trump vs. Iran, it hasn't been the focus of one of my posts since April, when I wrote MSNBC's Jacob Soboroff earns a Cronkite Award for coverage of family separation at the border followed the next day by Colbert and Meyers take closer looks at Kirstjen Nielsen's resignation.  That doesn't mean the problem has gone away.  It's still there and being examined again.  ABC News interviewed Rashida Tlaib, who visited one of the detention center, and said ‘Can’t throw more money at a broken system’: Rep. Tlaib on border funding in response to her voting no on a funding bill.*

Martha Raddatz interviews Rep. Rashida Tlaib on “This Week” about the congresswoman’s visit to a border detention facility in Texas and what’s next in the immigration debate.

The Acting DHS Secretary talks about the steps he says the department has taken to address concerns about conditions at the border and offensive social media posts by border agents.

First, I'm glad to see that Marth Raddatz pushed back at least as hard on McAleenan as she did on Tlaib; it made McAleenan cite some facts that can be checked.  That written, I still think Tlaib is accurately recounting what she saw.

Second, while I'm not thrilled that Trump's approval rating is as high as it's been, I'm more sanguine about it still being underwater.  Also, having immigration be a top issue can be dangerous, although I'm a bit reassured that a majority of Americans disapprove of Trump's handling of it.  I'm sure I'll be writing more about the issue as the election cycle goes on.  Stay tuned.

*Raddatz quoting Nancy Pelosi about how Tlaib and others are in an isolated group of four reminds me that it's time to revisit this footnote from Senators and Representatives running for the Democratic nomination are drifting to the left as they campaign.


I know at least three Representatives that Voteview considers to have moved to the right over the past two months, Ilhan Omar, Ayanna Pressley, and Rashida Tlaib.  They used to cluster near Barbara Lee, who has consistently been one of the most liberal members of the House with scores lower than -0.600.  Now, they have scores ranging from -0.303 to -0.330, placing them much closer to Alexandria Ocasio-Cortez, whose score is -0.213.

They may have moved to the center on the first dimension, but the four Congresswomen have the most liberal scores on the second dimension of DW-Nominate.  The fifth most liberal on the second dimension happens to be Justin Amash, who also voted no on supplemental funding for DHS, so it's not just the four Democratic Representatives that Pelosi sneered at.  In fact, 95 Democrats and 7 Republicans voted no, including Debbie Dingell, who is about as Establishment as one can get in Michigan's Democratic delegation.  Pelosi should pay more attention to detail if she wants to attack members of her own caucus in the future.
Posted by Pinku-Sensei at 11:22 AM