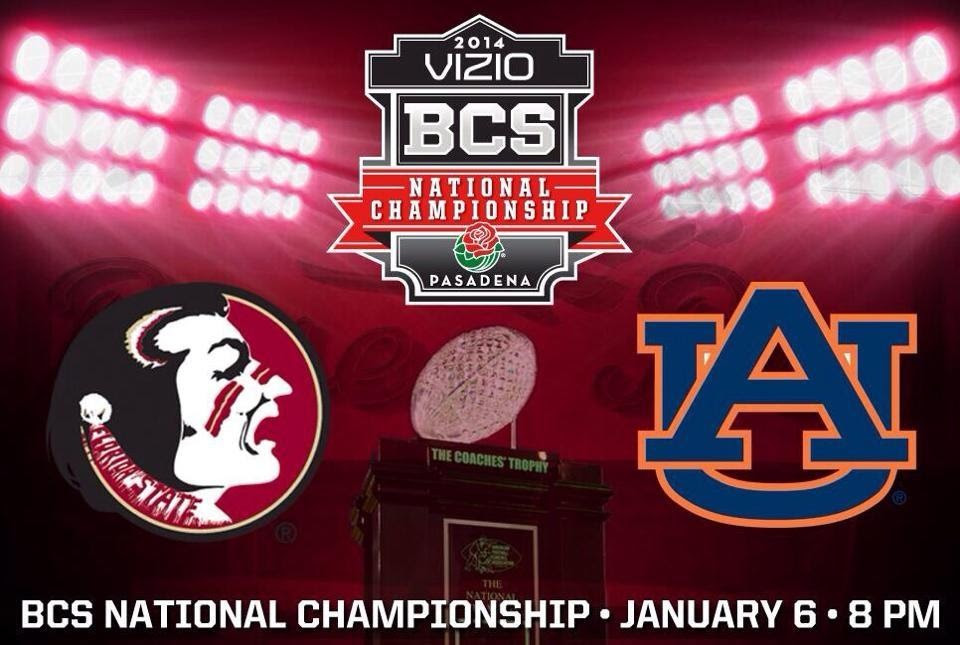 Tonight is the BCS National Championship Game, which gives me the perfect opportunity to feature all of the science, health, technology, and environment stories from the participating schools since I posted Sustainability, science, and technology on a football field and Health research and outreach from KPBS and campuses on the campaign trail.  Before I do that, it's time to present a video from an outlet I haven't used in such a long time that its YouTube channel has changed names--Next Media Animation's English service, which is now TomoNews US.

The top-ranked Florida State Seminoles and second-ranked Auburn Tigers will meet in Pasadena on Jan. 6 for the 2014 BCS National Championship Game sponsored by Vizio at the famous Rose Bowl Stadium.

If I want to watch the game, I'll have to do it in the bedroom.  There has not been enough signal for the TV in the living room since yesterday afternoon because of snow in the satellite dish.  I blame the DVR.

Follow over the jump for the past two month's stories from Auburn University that I've used on Overnight News Digest on Daily Kos but haven't already appeared here, starting with a demonstration of why the school describes themselves as "The Tigers who say 'War Eagle'" followed by some stories from Florida State University that I haven't used anywhere else.

Two stories show the connection between biodiversity and athletics Auburn that I first highlighted in Sustainability, science, and technology on a football field with a follow-up to Southeastern Raptor Center kicks off auction of gameday eagle jesses and lures Nov. 22 from Auburn University: Auction of Auburn eagle jesses and lure brings $12,600 to Southeastern Raptor Center.
December 11, 2013

AUBURN UNIVERSITY - An Auburn University alumnus had the winning bid in the online auction of War Eagle VII's jesses and a lure used during the pregame eagle flight at the epic 2013 Iron Bowl.

Bill Nelson of Birmingham bid $12,600 to benefit the College of Veterinary Medicine's Southeastern Raptor Center to own what he described as "certainly one of the best pieces of sports memorabilia Auburn has to offer." The 1970 Auburn College of Engineering graduate said the eagle pregame flight is one of his favorite gameday traditions.

That's the first one, which ties into the "War Eagle" yell.  Now, the Tigers, as Auburn and Missouri students team up with 'Tigers for Tigers'
December 5, 2013

AUBURN UNIVERSITY - Although rivals on the athletic field, students from Auburn University and the University of Missouri are working together to help save tigers in the wild through a conservation program called the National Tigers for Tigers Coalition. The coalition joins together academic institutions with tiger mascots to help spread awareness of the survival challenges tigers face, including habitat destruction, poaching and the pet trade.

"Tigers are such beautiful animals, and with it being our university's mascot, and with Aubie being consistently ranked one of the best in the nation, it makes sense that Auburn students would work to help Aubie's wild cousin, which is on the brink of extinction in its natural habitat," said Ashley Newell, a senior in zoology/pre-veterinary medicine and a campus representative for Auburn's Tigers for Tigers program.

The national coalition coordinator for Tigers for Tigers, Sean Carnell, said several states in the U.S., including Alabama, do not have regulations on the private ownership of big cats. He cites an estimated 5,000 big cats, such as tigers, are in private hands in Texas alone, and an estimated 13,000 are under private ownership nationwide. As a result, Tigers for Tigers supports the proposed Big Cats and Public Safety Protection Act, according to Carnell.

What's the athletic connection?  NMA/TomoNews US notes that "[t]he Tigers...won the SEC Championship by defeating Missouri 59-42."  So the project was sparked by the football game.  It's as good an excuse as any.

AUBURN UNIVERSITY – Auburn University professor Kenneth Halanych and his colleagues have made a new scientific discovery: acorn worms found in deep waters surrounding Antarctica secrete a tube around their bodies. The discovery of an acorn worm with the ability to make tubes is significant as the only other worms of this type known to make tubes lived more than 500 million years ago near the dawn of animal life on earth.

The group’s discovery comes on the heels of the first of two Antarctic research cruises. Last January, a team of scientists from the College of Sciences and Mathematics’ William P. and Ruth W. Molette Environmental and Climate Change Studies Laboratory spent six weeks on a research cruise exploring the genetic diversity of marine organisms found in the waters surrounding Earth’s southernmost continent.

The team will set sail on a second cruise from Nov. 21 to Dec. 20, and once again will explore the biodiversity of the Antarctic seas, searching for evolutionary relationships between species.

Rodents can tell us a lot about the way species evolve after they move into new areas, according to a new and exceptionally broad study conducted in part by Florida State University biological science Professor Scott J. Steppan.

The study of the evolutionary history of rodents calls into doubt a generally held understanding that when a species colonizes a new region, such as a continent, evolution leads to a dramatic increase in the number and variety of species.

“Biological diversification, or adaptive radiation, is generally thought to be the major explanation for diversification across all of life,” said Scott J. Steppan, a Florida State University professor of biological science. “One of the most fundamental questions in biology is why some groups of plants and animals have lots of species and others do not. To address this question, we developed the most comprehensive DNA-based family tree of the most evolutionally successful group of mammals — the muroid rodents.”

In the study, “Ecological Opportunity and Incumbency in the Diversification of Repeated Continental Colonizations by Muroid Rodents,” published in the journal Systematic Biology, Steppan, John J. Schenk of Tulane University and Kevin C. Rowe of Victoria Museum, Australia, used the phylogeny, or evolutionary family tree, of these rodents to test whether the adaptive radiation model of biological diversification actually is as common as presumed.
...
The researchers did find that there is a weak general effect of first colonizers suppressing diversity among later colonizers, and that there is one clear exception to the general pattern. The first colonization of South America by muroid rodents between 7 million and 10 million years ago did lead to one of the great radiations in mammals — with more than 320 species — that fits the model well.

Next, Study highlights snowball effect of overfishing by Tom Butler on 12/23/2013.

Florida State University researchers have spearheaded a major review of fisheries data that examines the domino effect that occurs when too many fish are harvested from one habitat.

The loss of a major species from an ecosystem can have unintended consequences because of the connections between that species and others in the system. Moreover, these changes often occur rapidly and unexpectedly, and are difficult to reverse.

“You don’t realize how interdependent species are until it all unravels,” said Felicia Coleman, director of the Florida State University Coastal and Marine Laboratory and a co-author on the study.

It's time to move from biology to the basic science used for technology, and both FSU and Auburn have research in those areas.  I'll let FSU go first with Florida State Center for Advance Power Systems researchers achieve major breakthrough by Tom Butler on 12/03/2013.

CAPS researchers, under a grant from the Office of Naval Research (ONR), were able to conduct 3000 amperes of direct current through a 30 meter-long high-temperature superconductor (HTS) test cable that is cooled using pressurized helium gas. The development is significant because the use of gaseous helium allows operation at significantly lower temperatures, thus reducing the size and weight of the power cables. Traditionally, liquid nitrogen is used to cool HTS cables.

“This is the first helium gas-cooled superconducting power cable demonstration in the world,” said Sastry Pamidi, the project’s principal investigator at CAPS. “Achieving this amount of power conduction using a much more ship-friendly cooling medium such as gaseous helium is a major accomplishment. It offers the Navy unique flexibility for a power delivery cable as it works to design and build a new generation of all-electric naval vessels with 100MW generating capacity and high power loads.”

AUBURN UNIVERSITY – Auburn University’s tribology and lubrication science minor, the first of its kind in the nation, recently received a gift from North Carolina-based RSC Chemical Solutions to provide scholarship and programmatic support.

Housed in the Samuel Ginn College of Engineering, the program provides Auburn students the opportunity to earn a minor in tribology, the multidisciplinary study of contact, friction, wear and lubrication of surfaces. The applications of tribology and lubrication science range widely to include bearings, tires and engines in automobiles; human joint replacement; manufacturing; nanotechnology; oil product chemistry; power generation; hard-drive technology; and electrical contacts.

RSC’s commitment, which totals $50,000, will provide funds to support six scholarships for students majoring in chemistry in the College of Sciences and Mathematics or chemical engineering in the Samuel Ginn College of Engineering and who also are pursuing a minor in tribology. The gift from RSC also includes an investment in an endowed fund for excellence, which will provide additional funds for faculty, student and operational support.

Finally, here's a story that mentions Auburn University, even though it's from New York University: NYU-Poly's Rappaport to lay groundwork for future cellular networks under NSF grant.

The exponential growth of wireless data traffic is depleting the spectrum and significantly stressing the capacity of wireless networks. The massive unlicensed bandwidth in the 60 GHz range holds potential to meet the surging wireless data demand in coming years. The goal of this NSF project is to gain a deep understanding of the 60 GHz propagation characteristics and to develop effective 60 GHz protocols that can be used in networks of the future.

Auburn University Marching Band (AUMB) holding their pep rally in preparation for the football team's BCS National Championship game against Florida State. The pep rally was held at Disneyland on Sunday January 5th and the game is on Monday, January 6th 2014 at the Rose Bowl in Pasadena.