The Archdruid and his readers on zombies 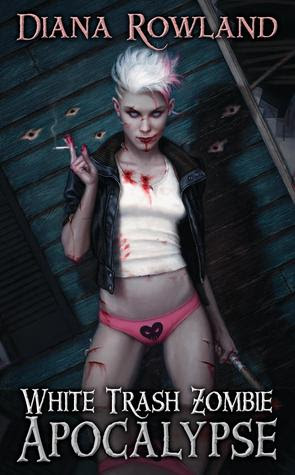 Tonight is the showing of the second episode of the second half of the fourth season of “The Walking Dead,” which I just finished watching with my wife.  To mark the occasion, I’m going to pull out a different conversation the Archdruid was having in the comments to 2030 is the New 2012, which was quite distinct from the one I had with him that I converted into Perspectives on the next doomsday from The Archdruid and me.  This one was with his other readers about the role of the zombie apocalypse.

Greer himself mentioned it twice in his essay, both time in terms that demonstrated that he didn’t take it seriously as a literal event.


From Jonathan Edwards’ famous 1741 sermon “Sinners in the Hands of an Angry God” right through to today’s zombie apocalypse craze, a good number of the biggest pop-culture phenomena in American history have focused on the end of the world in one way or another.
...
Besides the purely religious notion I hold to of an inevitable end (a product of faith and not extrapolation of current forces), I don't foresee an extinction of mankind, nor a zombie apocalypse, nor anything else.

While I am enough of fan of zombie apocalypse media that I have a zombies label for this blog, I share Greer’s opinion of it.


I consider the zombie apocalypse to be at best a metaphor for what Americans fear about the future, not a real possibility.

That written, it’s still worth exploring as a metaphor, which Bruin Silverbear did in comments.


I am a zombie fan. I have been since I was rather young. I even got myself (for a time) into the zombie apocalypse camp. I believe that your use of the word "fantasy" sums it up nicely. It has been my experience that most people who subscribe to the zombie apocalypse scenario, which has evolved into a metaphor for sudden collapse, see it as a fantasy in which they get to live out their hollywood dreams of shooting people and not having to answer to some moralistic entity for it. Nowadays, in the survivalist scene, individuals who are unprepared for sudden collapse and who seek to take your carefully hoarded goods are called "zombies" which implies a rather sinister fate for such folks at the hands of those more prepared. I suspect I could write a paper on the concept. Be that as it may, it is an easy fantasy to find yourself in. We live in a culture of limited or non-existent social justice, war, unreason and power allocated to people who do not have our best interests in mind in any way. Those that do are drummed out of the corridors of political power rather efficiently if they get elected at all. People like the idea of a zombie apocalypse or a falling meteor or a sudden collapse of any kind because it also feeds the idea that they can take more immediate control over their own lives when a secular authority no longer prevents them from living their fantasy of a large farm and a trusty assault rifle, even if that life is difficult and fraught with danger. There is also what you mentioned in that people can use impending doom as an excuse not to have to stand in front of the Tiananmen Square Tanks of progress who will stop for no protestor. In their version of events, as essentially pointed out by yourself if I am interpreting correctly, there is no need to stand in front of those tanks when you can just let them run out of gas on their own? I have often found that people want to join their voice to large scale social justice causes without actually doing anything in their communities for much the same reason. In the end, when the cause fails to gain ground, they need not be held personally responsible for the failure where at a local level they might be pointed out as being another ring leader in a failed philosophical coup de tat. All of this of course going back to what you have been saying for some time, cognitive dissonance. Is it wrong to tell believers in infinite progress that they will only be correct if we get the aliens to begin trading technologies with us? I am sure they could use Preservative filled frozen dinners and Microwaves for those long space/inter-dimensional journeys in return for whatever powers their spacecraft...

Back in October, I recall Nebris saying on Facebook that he didn't watch "The Walking Dead" because he wasn't interested in what he called "white trash fantasies."  Based on what Bruin wrote, it looks like he's right to call the show that.  That won’t keep me from watching it, but I’m keeping what he said in mind from now on.

As for Greer, while he dismisses an actual zombie apocalypse, he is interested in what the metaphor means.


Bruin, fascinating. As I'm not a zombie fan at all, it's interesting to hear from someone who gets that part of popular culture. I have to say, though, that I'd wondered whether the dehumanization of potential enemies was part of it, and it's rather troubling to find that I was right -- that way lies some very ugly futures.

That wasn’t the end of the discussion.  Follow over the jump for what three more people had to same about the meme and the replies they inspired from Greer.

The next one to bring up the topic was Rashakor.


I tend to agree with Derv on this: the generations still remembering the privileges of the industrial civilization (gen X, Y, and Millennials) are likely to snap back hard in most of the industrial world. This “discontinuity” may be characterized by widespread low intensity civilian warfare and will certainly be perceived as the “Revelation” to many people. It will only intensify the feeling of the “Zombie Horde” to the apocalyptophiles (Silverbear’s zombie analysis is actually very useful here to understand the zombie meme).
Humans will certainly come out of the other end and carry on a much poorer world and lifestyle. But that step down on the long descent will certainly be remembered as the A-word.


Rashakor, will it be remembered as the apocalypse, or as a triumph over the forces of evil?

The two would not be mutually exclusive; the Apocalypse of St. John would be considered both, and so might what Rashakor described.


About zombies and survivalists. What I have actually seen first-hand when sudden stress strikes an American community (flood, tornado, hurricane, etc.) is that once the debris stops flying and the waters recede, people immediately pull together, look for who needs help and who has resources to offer, and take care of things. I suspect that in an episode of acute food scarcity (about the only thing the average survivalist is actually prepared for), if someone were to open fire on those who were going without, the community might collectively string him up from the nearest tree. And during a period of quasi-permanent food scarcity, that same survivalist would likely starve alone in his bunker after his provisions ran out, having been shunned and exiled by the larger community for his antisocial behavior. Who is going to want to share their hard-earned meager crops, forage, and game with someone who sat atop his own hoard with his guns, not participating at all in the work to get some sort of subsistence food production going?

I hope and think that Bill’s right about this one.

Greer ignored that part of Bill’s post, focusing on what he wrote before and after that I snipped, but russell1200 had a response of sorts to it.


Most folks don't have the resources to prepare for a survivalist strategy that has to be in place for multiple decades. Thus like the drunk looking under the streetlight for his keys (because that is where the light is) they prepare for what they can cope with/afford.

Finally, the conversation went around full circle to another contribution by Bruin Silverbear.


One of the things I like about Zombies (The slow, zoned out Romero zombies) is the context. Romero was once quoted as saying that the "artistic" inspiration for his first zombie film "Night of the living dead" was that he believed we were becoming such a consumer culture that eventually we would consume ourselves, something I have found, after a fashion, as being a theme of your blog as well. This is a point he attempted to hammer home in some of his more recent films that worked less on subtlety and more on shock value with mixed results. To me, this is a great metaphor for the long decline although the "zombies" already walk among us in Big Box stores and Fast Food joints. I have a feeling that cognitive dissonance is well in play...people cannot imagine a change that isn't sudden because our gratification in this culture is also very sudden. Most everything you want is at the nearest retailer. Our culture has become, in my opinion, very impatient and the popularity of zombies is a reflection of that impatience in the sense that most people want a sudden collapse because it frees them from the rules they have been socialized to operate around. For a time I was an administrator on a zombie themed social networking site and constantly read through the forums. One of the common themes was "You have to be more careful about humans than zombies" which would almost always devolve into "If anyone comes near me I'll kill them." One thing I can say about the internet is that on forums where few people really know each other you get to see the underbelly a bit more clearly. When that forum is primarily predisposed to an incredibly violent (and also incredibly farcical)apocalyptic scenario, all sorts of vitriol rolls out about what happens to people. Most of it is childish bragging and things learned from watching too many action films but this is what fuels those expectations...everyone gets to be the Alpha and nobody better cross them...chilling fare indeed.

Of course, Greer got the last word.


Bruin, that makes sense. One of the reasons I'm expecting to see a violent domestic insurgency here in the US is precisely the obvious longing, on the part of a great many people, for the freedom to open fire on their fellow citizens.

On that note, I think I’ll have a drink.  Tipsy Bartender has just the recipe, too, and it’s not a repeat of the one featured in Drink and drive with "The Walking Dead".  Behold the original Walking Dead Cocktail from 2012.

This drink is horrifically potent....THE WALKING DEAD COCKTAIL! Everything about this drink is extreme: the size, the number of liquors used, and the fact that it contains some outrageously strong spirits! We mix this cocktail up in a massive margarita glass and it looks delightfully terrifying!

Yow!  That drink both looks like zombie brains and will turn you into a zombie.  Based on Sophie’s reaction, it also tastes terrible.  I’m not drinking it.  Time to find another recipe.