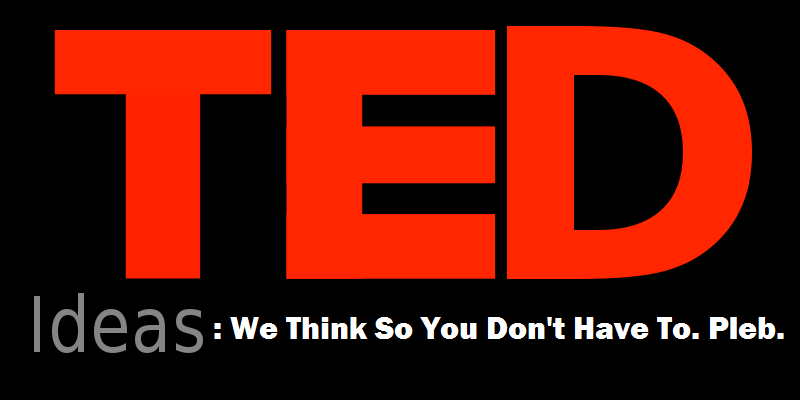 Near the end of Discovery News thinks it's the best time ever to be alive, I noted that "I have a contrary view about techno-optimism on tap from TED, of all places."  Now, don't get me wrong; I love TED talks and have used them enough that the blog has a label for them.  I certainly don't agree with the sentiment that TED is evil, which happens to be where I got the graphic for this entry.*  Just the same, TED is not beyond criticism, as a UCSD professor pointed out last year in, ironically, one of the TEDxTalks series: New perspectives - what's wrong with TED talks? Benjamin Bratton at TEDxSanDiego 2013 - Re:Think.

Benjamin Bratton, Associate Professor of Visual Arts at UCSD and Director of The Center for Design and Geopoltics at CALIT2, asks: Why don't the bright futures promised in TED talks come true? Professor Bratton attacks the intellectual viability of TED, calling it placebo politics, middlebrow megachurch infotainment, and the equivalent of right-wing media channels. Does TED falsely present problems as simply puzzles to be solved by rearranging the pieces?

That got the attention of KPBS whose David Wagner reported on both the subject and ironic choice of venue in UC San Diego Professor Slams TED Talks — During His TED Talk.


TED Talks are exclusive, expensive and reach an insane number of viewers online.

They've also provoked a ton of backlash. The conference of "ideas worth spreading" has been called "elitist," "cultish" and "a place where ideas, regardless of their quality, go to seek celebrity." One San Diego academic recently took the anti-TED gospel to those least likely to want to hear it: TED devotees.

KPBS was not done, as they interviewed Bratton and posted the video last week as UC San Diego Professor Slams TED Talks — During His TED Talk.

One San Diego academic recently took the anti-TED gospel to those least likely to want to hear it: TED devotees.

He definitely has a contrary view, but one that should be taken seriously.  We do need fora other than TED to have serious conversations about technology, economics (not entertainment), and design.  We also need to realize that a better future is going to be hard work and it won't happen without that hard work.  Faith in progress and placebo politics won't cut it.

*I don't agree with that, either, but it did a good job of capturing the essence of the criticism.
Posted by Pinku-Sensei at 2:38 PM